The Hip Chick's Guide to Macrobiotics: A Philosophy for Achieving a Radiant Mind and a Fabulous Body (Paperback) 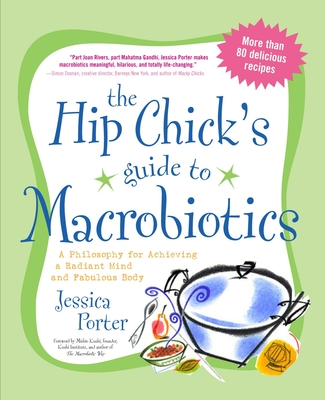 The Hip Chick's Guide to Macrobiotics: A Philosophy for Achieving a Radiant Mind and a Fabulous Body (Paperback)


Special Order—Subject to Availability
A modern girl’s guide to the secrets of eating for health, beauty, and peace of mind.

Heralded by New York magazine as one of the city’s most popular diets, macrobiotics has become the latest trend in dieting, thanks to high-profile supporters like Madonna and Gwyneth Paltrow.

Speaking to the generation of young women looking to extend their healthy lifestyles beyond yoga and Pilates, macrobiotic chef and instructor Jessica Porter offers fresh, contemporary, and accessible insight into one of the world’s most popular diets that is based on century’s old principles. She explains that through the right balance of food, women can find balance in every aspect of their lives—improved health, weight loss, or fulfilling relationships.

The effects of eating a macrobiotic diet can extend beyond basic health to weight loss, beauty, better sex, and peace of mind. Cooking tips and recipes are combined with Jessica’s no-nonsense philosophy and witty anecdotes to create a lifestyle book that will inspire women to hit the kitchen with an understanding of how to strengthen their mind and body through food.

Jessica Porter is a macrobiotic chef, cooking instructor, and hypnotist. She completed her macrobiotic training at the Kushi Institute in Beckett, Massachusetts. She hosts a weekly radio show in Portland, Maine, has written and appeared in her own one-woman show, Zen Comedy, and has been featured in Simon Doonan’s recent book, Wacky Chicks: Life Lessons from Fearlessly Inappropriate and Fabulously Eccentric Women.