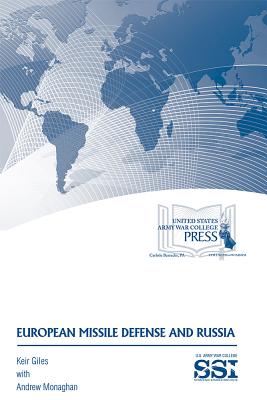 
Special Order—Subject to Availability
This monograph examines the history of missile defense and the current dialogue from a Russian perspective, in order to explain the root causes of Russian alarm. Specific recommendations for managing the Russia relationship in the context of missile defense are given. Important conclusions are also drawn for the purpose of managing the dialog over missile defense plans not only with Russia as an opponent, but also with European NATO allies as partners and hosts. The latter are especially significant in the light of these partners' heightened hard security concerns following Russian annexation of Crimea and continuing hostile moves against Ukraine. This analysis was completed before the start of Russia's annexation of Crimea in March 2014, but already warned of the prospect of direct military action by Russia in Europe in order to protect Moscow's self-perceived interests.

This text is strongly recommended to policymakers contributing not only to missile defense planning, but also to any aspect of policy affecting the defense of Europe. Political scientists, historians, military leaders and personnel, as well as strategic policy analysts, and the intelligence community may be interested in this work. Students conducting research on the history of the U.S. missile defense program as it relates to Russia for term paper assignments may be interested in this volume.

Another Brick in the Wall: The Israeli Experience in Missile Defense can be found here: https: //bookstore.gpo.gov/products/sku/008-000-01138-9

ABOUT THE AUTHORS KEIR GILES is the director of the Conflict Studies Research Centre (CSRC), a group of deep subject matter experts on Eurasian security formerly attached to the United Kingdom (UK) Ministry of Defence. Now operating in the private sector, CSRC provides in-depth analysis on a wide range of security issues affecting Russia and its relations with overseas partners. After beginning his career working with paramilitary aviation in Russia and Ukraine immediately following the fall of the Soviet Union, Mr. Giles joined the BBC Monitoring Service (BBCM) to report on political and military affairs in the former Soviet space. While attached from BBCM to CSRC at the UK Defence Academy, he wrote and briefed for UK and North Atlantic Treaty Organization (NATO) government agencies on a wide range of Russian defense and security issues. Uniquely, he is a double Associate Fellow of the Royal Institute of International Affairs (Chatham House) in London, UK, as well as a regular contributor to research projects on Russian security issues in both the UK and Europe. Mr. Giles's work has appeared in a wide range of academic and military publications across Europe and in the United States. ANDREW MONAGHAN is a Research Fellow in the Russia and Eurasia Programme at Chatham House and an Academic Visitor at St. Antony's College, Oxford, UK. Additionally, he is the Founder and Director of the Russia Research Network, an independent organization for the generation of information and expertise on Russian politics, security, and economic issues based in London. In this capacity, he has served as an expert witness to the House of Commons Foreign Affairs Select Committee. Until late-2012, Dr. Monaghan directed Russian related research in the Research Division of the NATO Defense College in Rome, Italy. In this role, he was also the senior researcher on energy security matters. Prior to that, he held positions as a Senior Research Associate at the Advanced Research and Assessment Group, part of the Defence Academy of the UK, and a Visiting Lecturer in the Defence Studies Department of King's College, London, the civilian academic arm of the Joint Services Command and Staff College at the Defence Academy. Dr. Monaghan holds an M.A. in war studies and a Ph.D. in Russian foreign policy (Russian perspectives of Russia-European Union security relations) from the Department of War Studies, King's College.