Preparing for War?: Moscow Facing an Arc of Crisis (The LeTort Papers) (Paperback) 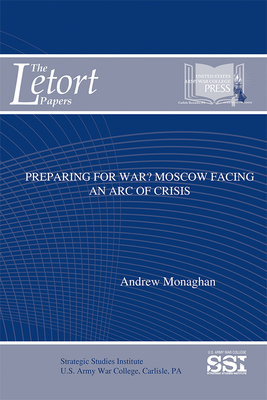 Preparing for War?: Moscow Facing an Arc of Crisis (The LeTort Papers) (Paperback)


Special Order—Subject to Availability
The Russian state is mobilizing. This means that the top leadership is moving the country onto a war footing in order to address what Moscow sees as an arc of crisis around Russia and a period of great turbulence in international affairs. Risks are seen in Moscow to include the possibility of the outbreak of war and regional instability caused by Western-led wars of regime change that could directly affect Russia.

This mobilization has been under way for some time, and is best understood as a process of consolidation and preparation: the Russian leadership sees war as a test of society, and despite its actions during the Ukraine crisis and in Syria, understands that Russia is not yet ready for such a test. This is because the Russian system, although in some respects powerful, is often dysfunctional. Russia also bears a heavy Soviet inheritance, including limited and decrepit infrastructure, and the military has endured many years of underfunding and neglect.

This consolidation is reflected in a series of measures to strengthen the political system both in terms of ensuring the implementation of orders and also of its resilience against potential civil disobedience and threats posed by extremism and terrorism. The leadership is also conducting a major effort to modernize the military, including a major investment program, enhancements to command and control, and frequent no-notice exercises to test readiness and responsiveness,

Russia & the Soviet Union resources collection can be found here: https://bookstore.gpo.gov/catalog/international-foreign-affairs/russia-soviet-union
ABOUT THE AUTHOR:

ANDREW MONAGHAN is a Senior Research Fellow in the Russia and Eurasia Programme at Chatham House, where his work is supported by the Gerda Henkel Foundation. Dr. Monaghan is also a Visiting Fellow at the Changing Character of War Programme at Pembroke College, Oxford. Additionally, he is the founder and director of the Russia Research Network, an independent organization for the generation of information and expertise on Russian politics, security, and economic issues based in London.

Until late-2012, he led Russian-related research in the Research Division of the North Atlantic Treaty Organization (NATO) Defense College (NDC) in Rome. In this role, he was also the NDC’s senior researcher on energy security matters. He has also been an academic visitor at St. Antony’s College, Oxford (2013-2015), and a senior research associate at the Advanced Research and Assessment Group (ARAG), part of the Defence Academy of the United Kingdom (2005-2009). He has also served as an expert witness to several par­liamentary committees including: the UK’s National Security Strategy Committee; the House of Commons Defence and Foreign Affairs Select Committees; and NATO’s Parliamentary Assembly.

He is widely published and is the author of: The New Politics of Russia—Interpreting Change, published by Manchester University Press in 2016; and The Elements of Impact. Making Your Point in Public Speaking and Writing, published by the Conflict Studies Research Centre in 2015.
He received his Ph.D. in Russian foreign policy (Russian perspectives of Russia-European Union security relations) from the Department of War Studies, King’s College, where he also obtained an M.A. in war studies, graduating with the Simon O’Dwyer Russell Prize for academic distinction.