I Can Take it from Here: A Memoir of Trauma, Prison, and Self-Empowerment (Truth to Power) (Paperback) 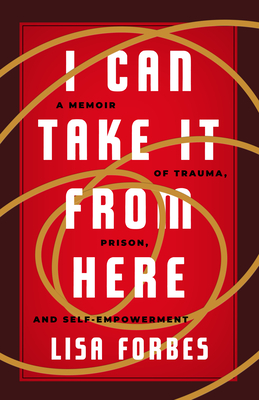 I Can Take it from Here: A Memoir of Trauma, Prison, and Self-Empowerment (Truth to Power) (Paperback)


On Our Shelves Now at:
An emotional, page-turning account of unhealed trauma and personal transformation that will break your heart and change your mind, in the tradition of Somebody's Daughter, A Piece of Cake, and Jesmyn Ward's Men We Reaped

Riveting, honest, and raw, I Can Take It From Here recounts Lisa Forbes's harrowing journey into darkness — including a fourteen-year-long stint in a maximum-security prison — and her fierce resolve to understand the effects of the trauma she endured, to take personal responsibility for her actions, and to ensure that her history does not dictate her destiny.

The youngest of six children, Lisa grew up in a Chicago housing project where she endured sexual, religious, and emotional abuse as a little girl. A voracious reader, she graduated high school at 15 and went to work as a secretary in a downtown insurance office, became pregnant at 16 and, at 19, unexpectedly and uncharacteristically committed a violent act, stabbing and killing the father of her daughter.

Providing powerful insights into what we as a society need to learn and confront in the ongoing epidemic of mass re-incarceration, Lisa is a stunning example of an individual who through determination, knowledge, and hard work has been able to reclaim her own life.

The book ends with Lisa's rousing call to action to support the people—as well as the shorthanded employers—who need the help, and need each other, more than ever.
Lisa Forbes grew up poor on the South Side of Chicago. An ex-con in her thirties, she started her own company, Lisa Forbes Inc., to help restored citizens cope with post-prison life. Based in Denver, she has spoken widely and conducted many workshops. Previously the state communications director for the League of Women Voters of Colorado, Forbes now edits her local county League’s monthly newsletter, The Voter. Additionally, Forbes is a Colorado co-coordinator of Better Angels, a national citizens’ movement to bring liberals and conservatives together at the grassroots level.
"Lisa Forbes’ gripping, searing  story provides powerful insights into what we, as a society, need to learn and confront in the ongoing epidemic of mass re-incarceration."
--Chicago Crusader

“Forbes’ memoir holds a particular place in the discourse surrounding criminal justice reform. As policymakers, activists, and ordinary citizens grapple with mass incarceration and public safety, Forbes is a voice to be heard in a conversation that must be had, as an advocate for addressing the root problems associated with crime with the hope of reducing recidivism and providing formerly incarcerated individuals with the opportunities they need to successfully re-enter society.”
--South Side Weekly

"Forbes has a story that needs to be read, and one that she has clearly synthesized and analyzed to ensure its significance encompasses both her personal successes and a much larger societal reform."
--Library Journal (starred review)

"Forbes' clear, honest, and inspiring memoir proves she is a champion for herself and the struggle against mass incarceration and recidivism."
--Booklist

"An inspirational memoir that moves from childhood trauma to incarceration to eventual reintegration into society, I Can Take It from Here is compelling as it argues that trauma resolution for individuals is critical to criminal justice reform."
-- Foreword Reviews

“While I've long been a proponent of second chance initiatives, Lisa Forbes' memoir forced me to rethink how best to impact change. Lisa argues that, while housing and jobs are indeed a major obstacle to returning citizens, addressing the underlying trauma that leads so many to the criminal justice system should be at the real core of our work as a society. Her gripping and, at times, graphic story of her trials, tribulations, and triumph left me inspired."
-- Johnny C. Taylor, Jr., President & CEO, Society for Human Resource Management SHRM