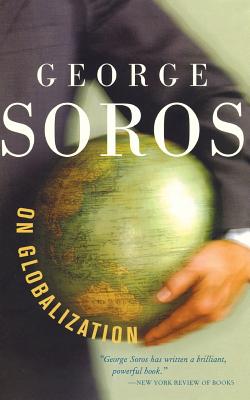 
Not On Our Shelves—Ships in 1-5 Days
Never before have we stood to gain or lose as much from understanding the international economy. Scandals plague the world's largest corporations, the American trade deficit has soared to historic heights, and international organizations from the World Bank to the WTO are accused of being inefficient and corrupt. Is our global economy as unhealthy, and as unjust, as we think? And what can be done about it?

At this critical juncture, George Soros, a major proponent of globalization, takes to task the many institutions that have failed to keep pace with our global economy. At the same time, he offers a compelling new paradigm to bring the institutions and the economy back into necessary alignment. Economics are amoral, he argues -- but neither our society nor our economy can afford to function without a distinct system of right and wrong. As we look toward the future and wonder what's ailing our economy, where our jobs are going, and whether the power of economics can be harnessed for positive changes, this thoroughly updated edition of George Soros on Globalization is a report no citizen of the world can do without.
George Soros was named as the Financial Times Person of the Year for 2018, citing the standard bearer of liberal democracy and open society: the ideas which triumphed in the cold war, now under siege from all sides, from Vladimir Putin's Russia to Donald Trump's America.

For more than three decades, George Soros has used philanthropy to battle against authoritarianism, racism and intolerance. Through his long commitment to openness, media freedom and human rights, he has attracted the wrath of authoritarian regimes and, increasingly, the national populists who continue to gain ground, particularly in Europe.

He is chairman of Soros Fund Management and founder of a global network of foundations dedicated to supporting open societies. Soros is the author of several bestselling books including The Crash of 2008 and The Crisis of Global Capitalism.