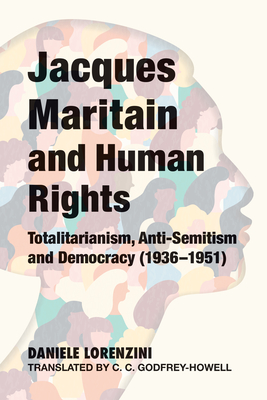 
Coming Soon—Pre-Order Now
The influence of Jacques Maritain in the post-war era’s embrace of human rights is undeniable. Scholars, however, overlook a major shift in his use of language. Daniele Lorenzini argues the turn from Maritain’s use of the expression “rights of the person” to ”the rights of man” is packed with meaning. Reconstructing the historical context in which this shift occurred is key to fully grasping what Maritain accomplished. It is also essential if one seeks to defend Maritain against accusation that he enacted a victory of the American and French modern revolutionary spirit over ecclesiastical teaching when he legitimized “the rights of man.”

The notion that Maritain may have taken up the cause of the civic-secular citizen when these secularly articulated rights were consciously never embraced by Catholic magisterium (that instead promulgated the rights of the person) merits serious attention. Lorenzini reconstructs Maritain’s historical context and theoretical trajectory shaped by particular circumstances––most evidently World War II, but also his time in the United States and his work with the Committee of Catholics for Human Rights. Lorenzini is not suggesting that Maritain staged a siege of Catholic thought, but that he did in fact lay the foundations for turning the conversation away from the tenets upheld by ecclesiastical authority on the concept of rights toward an articulation that more pointedly connects such rights to the actual possession and protection.

How and why this happens, Lorenzini demonstrates, is “grasped only if critically situated in the union of history of history and biography that makes this possible and encourages it, as does Maritain’s residency in the United States––an exile that obliged the French philosopher to render a deep seated account of the unbelievable (and tragic) political and intellectual panorama.” In short, Maritain set in motion the innovative redefinition of the elements that would soon be known as the human rights. But to Maritain these elements were always proper to the new ideal of the “vitally Christian” political city, the city “founded essentially on the two ‘pillars’ of democracy and the safeguarding of the rights of man.”

What originally began as a purely linguistic investigation of Maritain’s use of terminology has led Lorenzini to ask whether Maritain himself was won over from the act of conversing of rights associated with personhood to the real-time struggle for these rights, an evolution not just of Maritain’s language but of the man himself.

Lorenzini’s work is a formidable contribution to the literature pertaining to the period of post-war thought and Maritain on human rights. In his labors to carefully digest the full span of Maritain’s intellectual trajectory on rights, Lorenzini brings Jacques Maritain alive both as a man of vision but also fervent action, and defends him from critics and historians that accuse him of spurning Church teaching and papal authority. As Lorenzini’s study shows, the human rights of the secular-civic world––whose lineage scholars attribute in large part to Maritain––were always derived from Catholic teaching and intended for use in constructing the truly Christian city.

This work stands out in a vast repertoire of work on the subject of Jacques Maritain, and accomplishes both high level philosophical and historical sleuthing. It is of particular interest to American readers who may not fully realize the depth of Maritain’s maturation of thought during his residency in the United States. This is an astounding read for historians, scholars of political philosophy, and students of Jacques Maritain.
Daniele Lorenzini is Assistant Professor of Philosophy at the University of Warwick, where he is also Deputy Director of the Centre for Research in Post-Kantian European Philosophy. He is the author of Éthique et politique de soi (Vrin, 2015) and La force du vrai (Le bord de l'eau, 2017), as well as the editor of Foucault and the Making of Subjects (Rowman & Littlefield, 2016).