Toward Another Kingdom: Two Dramas of the Darker Years (Paperback) 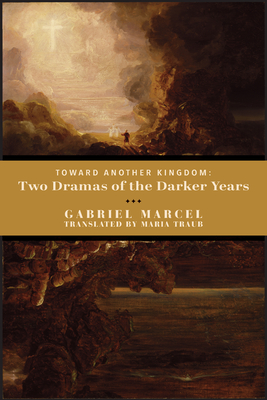 Toward Another Kingdom: Two Dramas of the Darker Years (Paperback)


Coming Soon—Pre-Order Now
Maria Traub's translation of Gabriel Marcel's post-war plays is a window into the French philosopher's answer to his own signature questions regarding human existence. And as in the earlier collection of plays, The Invisible Threshold, the realism, passion and sincerity that frame conscience and moral duty in Marcel are most profoundly visible in the day-to-day of family life. Ideas never before presented theatrically emerge in Marcel's characters who struggle to understand their times and how best to live in them. Post-war life was as much a spiritual reckoning as it was a new society, and Marcel's treatment of introspection is a valuable key to his own work.

Marcel's dramas require characters to respond authentically and from their true selves. He thereby offers the vision of how individual compromises may build up to break the world and condemn, or, conversely, contribute to the discovery and meaning of relation and redemption. Traub's new translation will interest the player as much as the scholar, and Marcel's aptitude for theatrical writing is proven once again. His intellectual sensitivity creates characters that beckon performance, which is an added dimension to the presentation of the human condition.
Maria Traub holds a doctorate in Modern Language (Middlebury College, Vermont) with a specialization in French and Italian literature. She is currently Associate Professor of French and Italian at Neumann University (Aston, PA). She has published numerous scholarly papers, and is a noted translator. Traub's translation of the correspondence between the Court of Versailles and figures of the American Revolution was recently used in Tim McGrath's Give Me a Fast Ship: The Continental Navy and America's Revolution at Sea (Caliber, 2014). An earlier translation by Traub of Gabriel Marcel's plays was published by St. Augustine's Press (The Invisible Threshold, 2019).