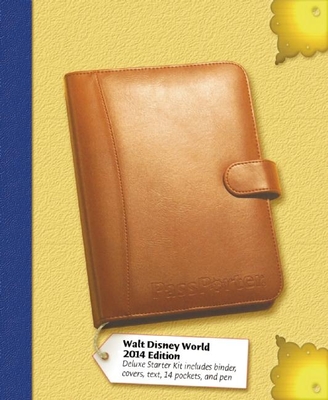 
Not On Our Shelves—Ships in 1-5 Days
With four major theme parks and 22 hotels, Disney World can be daunting -- this indispensable travel planner simplifies the process. The authors have been honing their advice, expanding their coverage, upgrading the book's features, and delighting readers for over 15 years. Each park gets in-depth coverage, complete with full-color fold-out maps and a description of every ride and attraction along with extensive profiles of Disney-owned resort hotels featuring detailed maps, color photos, room layouts and the park's 300+ dining options. With this handy guide, you can create vacation itineraries before you go and keep Disney maps, brochures, passes, and receipts inside the pocket while you're there along with recoding memories and expenses on the back to review when you return home Another feature is the author's nine-year-old son Alexander rating attractions with his A-OK for kids accompanied by age-appropriateness rankings from his parents, giving adults a heads up on what attractions are suited for kids. So when the magic of Walt Disney World beckons, pick up a copy of the award-winning PassPorter's Walt Disney World 2014 and discover the worlds #1 vacation destination through the eyes of seasoned fans, and be organized and better budgeted than you ever dreamed possible.
Dave Marx is cofounder and publisher of PassPorter Travel Press and along with Jennifer Marx, has co-authored 28 PassPorter guidebooks. He discovered Disneyland in 1975, the Walt Disney World Resort in 1997 and first cruised with Disney in October 1999. He's since booked passage with Disney 18 more times and, as with Jennifer Marx, was aboard for the Christening and maiden voyage of the Disney Dream and Disney Fantasy Inaugural. Jennifer Marx's most noteworthy cruises include the Disney Magic's eastbound Panama Canal crossing in August 2005, and a 2006 Mediterranean cruise researching Disney's 2007 Mediterranean visit. She is the author of more than 30 books, including the guide that started it all: PassPorter's Walt Disney World. Jennifer and Dave's 9-year-old son, Alexander Marx, is a veteran visitor to Walt Disney World and has cruised the Mediterranean and sailed from Los Angeles to Port Canaveral, FL via the Panama Canal. He offers expert opinions and brings his own 'Toddler Tips' and 'Kid Tips' to this guidebook. They live in Ann Arbor, MI.