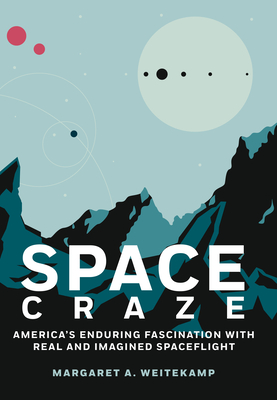 By Margaret A. Weitekamp


On Our Shelves Now at:
A space historian's tour through astounding spaceflight history and the Smithsonian's collection of space and science fiction memorabilia

Spanning from the 1929 debut of the futuristic Buck Rogers to present-day privatization of spaceflight, Space Craze celebrates America's endless enthusiasm for space exploration. Author Margaret Weitekamp, curator at the Smithsonian's National Air and Space Museum, writes with warmth and personal experience to guide readers through extraordinary spaceflight history while highlighting objects from the Smithsonian's spaceflight collection.

Featuring historical milestones in space exploration, films and TV shows, literature and comic strips, toys and games, and internet communities, Space Craze is a sci-fi lover's dream. The book investigates how spaceflight, both real and imagined, has served as the nexus where contemporary American concerns, such as race, gender, sexuality, freedom, and national identity, have been explored and redefined. Chronological chapters include:

From the almost 650 million viewers who tuned in to watch the first steps on the Moon, to the ardent Star Trek fandom that burgeoned into a cultural force, Space Craze taps into the country’s enduring love affair with space.
Margaret A. Weitekamp is chair of the Space History department at the Smithsonian’s National Air and Space Museum where she curates the Social and Cultural History of Spaceflight Collection encompassing some 5,000 pieces of space memorabilia and science fiction objects. She is also the author of Right Stuff, Wrong Sex: America’s First Women in Space Program.

“Dr. Weitekamp is a dream docent, walking the reader carefully through a hundred years of design, toys, movies, books, TV shows, and countless other cultural artifacts to tell the ongoing story of how space exploration has affected our culture and vice versa. This virtuous cycle is a thrilling tale, and along the way we meet an inspiring cast of characters, all motivated by the same drive to explore and expand our knowledge of our universe.” —Adam Savage, host of Adam Savage’s Tested and former cohost of Mythbusters

“Compelling and meticulously researched, Space Craze offers a superb chronicling of America’s longstanding love affair with space exploration. From Buck Rogers and Flash Gordon to Star Trek and Star Wars, Margaret Weitekamp uses a curator’s eye to compile what is an essential tool for understanding how space has shaped our culture.” —Christian Davenport, space reporter for The Washington Post and author of The Space Barons: Elon Musk, Jeff Bezos, and the Quest to Colonize the Cosmo

“In Space Craze, Weitekamp deftly chronicles the expansion of the space program in the 1960s alongside our enthusiasm for space exploration as reflected in popular culture. She points out how the space program and early science fiction television were initially devoid of any people of color, perfectly setting the stage to see how groundbreaking Star Trek was in depicting a futuristic starship that included a racially diverse crew and a half-human/half-alien Mr. Spock in a position of command. Bravo.” —Adam Nimoy, director of For the Love of Spock

“Weitekamp has produced an important book on the first great pillar of space travel: science fiction and the power of imagination. In a readable yet detailed manner, Weitekamp cleverly employs museum artifacts to reveal the ways objects capture elements of national identity and confirms once again that modern space travel is as much about the past as about the future.”
—Howard McCurdy, author of Space and the American Imagination

WIRED
"The first Americans to go to space and the first to travel to the moon were surely heroes, but let’s be honest, they pretty much looked the same: white men who were also Christian, married, military-trained jet pilots. Early space photographers had to ask them to stand alphabetically so they wouldn’t be mixed up in the captions. But Margaret Weitekamp argues that not only has that been changing, it’s partially the result of the evolution of space science fiction. The space historian makes a solid case that NASA—and the American public—have moved beyond the Buck Rogers archetype for astronauts, with many people, though not all, aspiring to the more inclusive ideals of Star Trek. It’s a smart look at the future of NASA, while digging into its past." —Ramin Skibba, WIRED space writer

THE SPACE REVIEW
"The book expertly tracks [changing circumstances] in society and our interest in spaceflight, reflected not just in vehicles that fly to space but the replicas of them enjoyed by people on Earth."