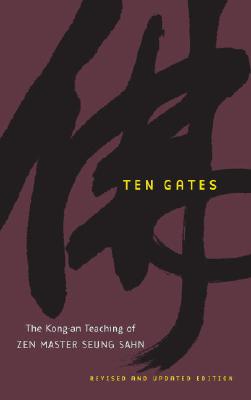 
Not On Our Shelves—Ships in 1-5 Days
(This book cannot be returned.)
Zen is famous for koans (called kong-ans in Korean, and in this book), those bizarre and seemingly unanswerable questions Zen masters pose to their students to check their realization (such as “What is the sound of one hand clapping?”). Fear of koans keeps some people from ever giving Zen practice a try. But here, through the experience of seeing a modern Zen master work with his students, you can see what koan training is really like: It’s a skillful, lively practice for attaining wisdom.

This book presents the system of ten koans that Zen Master Seung Sahn came to call the “Ten Gates.” These koans represent the basic types one will encounter in any course of study. Each of the ten gates, or koans, is illuminated by actual interchanges between Zen Master Seung Sahn and his students that show what the practice is all about: it is above all a process of coming to trust one’s own wisdom, and of manifesting that wisdom in every koan-like situation life presents us with.

For more information on the author, Zen Master Seung Sahn, visit his website at www.kwanumzen.com.
Zen Master Seung Sahn (1927–2004) was the first teacher to bring Korean Zen Buddhism to America, having already established temples in Japan and Hong Kong. In 1972 he came to the United States and started what became the Providence Zen Center, the first center in what is now the Kwan Um School of Zen, which now includes more than eighty centers and groups worldwide. His students called him Dae Soen Sa Nim, "Great Honored Zen Teacher," and he was the 78th Zen master in his line of dharma transmission in the Chogye order of Korean Buddhism. His books include The Compass of Zen, Dropping Ashes on the Buddha, Only Don't Know, and The Whole World Is a Single Flower: 365 Kong-ans for Everyday Life.