Quest for the Lost City (Paperback) 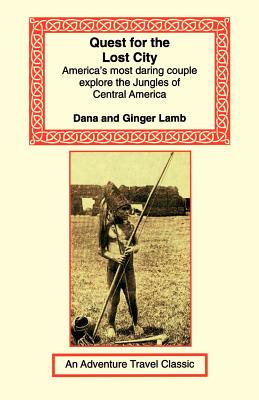 Quest for the Lost City (Paperback)


Not On Our Shelves—Ships in 1-5 Days
(This book cannot be returned.)
What do you do for excitement after you and your wife have made adventure travel history? If you're Dana and Ginger Lamb, authors of "Enchanted Vagabonds," you put away your famous canoe, turn away from the sea, and march inland, bound this time not for the misty green waves of the Pacific, but the forbidding green hills of the unexplored Mayan Jungle. "Quest for the Lost City" is the story of how the Lambs returned to their old Spanish speaking haunts. Only this time they were not roaming in general. They were seeking in particular for the source of a legend, the fabled lost city of the Mayas. For more than 2,000 miles the authors traveled in search of clues to this ancient riddle. They marched through the northern deserts of Mexico, making their way at last to the jungles of Chiapas, Mexico. There they encountered a series of adventures that even their hardened souls were not prepared for. They were attacked by animals and insects. A close friend died a mysterious death. After finding a clue to the lost city, they were brought up short by the Barrier Cliffs, a giant wall of stone which they traveled through, not over, with the aid of some primitive wooden torches. In short, if you are seeking adventure travel at its best, then go no further. Amply illustrated with photographs taken on their legendary journey, "Quest for the Lost City" remains one of the most exciting exploration books of the 1950s.