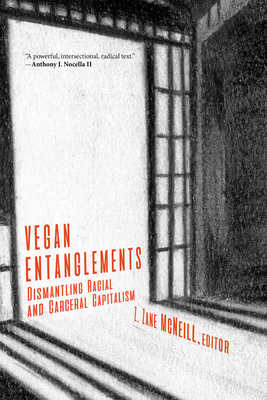 
Special Order—Subject to Availability
Scholarly and personal essays on the intersections of the prison-industrial complex, industrial animal agriculture, and capitalism.

Vegan Entanglements: Dismantling Racial and Carceral Capitalism invites over 15 activists, scholars, and journalists to grapple with some of the most topical issues facing the animal protection movement, specifically its historical dependence on the prison- and immigration- industrial complexes and the carceral logics that inform and normalize the violence of incarceration and deportation. The contributors to this collection not only dissect and interrogate this relationship between the animal welfare movement and carcerality, surveillance, white supremacy, and capitalism, but offer concrete tactics for activists, non-profits, and other stakeholders to create a more equitable animal welfare movement based upon abolition and collective liberation.
Z. Zane McNeill is a nonbinary activist-scholar, ten-year vegan, and coeditor of Queer and Trans Voices: Achieving Liberation Through Consistent Anti-Oppression. Zane lives in Morgantown, West Virginia.