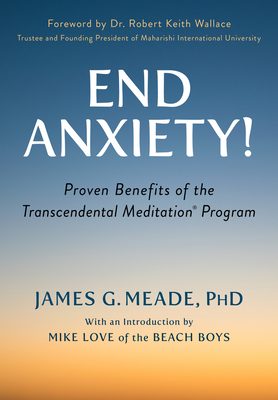 
Not On Our Shelves—Ships in 1-5 Days
These days current events are fraught with political animosity, global pandemic, warfare, gun violence, and economic insecurity. The troubling times that we live in leave us uncertain where we stand and in what direction we are going. So it is with good reason that anxiety levels have peaked and the affliction has extended to almost every segment of society—whether they like to admit it or not. We may not be able to change the world but End Anxiety!: Proven Benefits of the Transcendental Meditation® Program, by James Meade, PhD shows us how we can help ourselves. The problem is real, so what can we do about it? In End Anxiety!, James Meade offers an instant and lasting solution—the Transcendental Meditation® program, as taught by Maharishi Mahesh Yogi. This may at first seem like a novel approach to the issue, but studies on the effects of Transcendental Meditation® on the mental states of its practitioners have been ongoing for over fifty years and the findings are conclusive: Transcendental Meditation can have a real and powerful positive impact on our mental health, especially in terms of mitigating anxiety, stress, and depression.
James G. Meade, PhD is a prolific author and a thoroughly engaging one. His books have sold more than 750,000 copies. These titles include The Answer to Cancer, with Dr. Hari Sharma, and The Human Resources Software Handbook, which was a standard industry blueprint for HR departments. Clever, funny, and lucid, Meade is a born writer who has sharpened his skills with 31 books and hundreds of articles. His Ph.D. is in English. He has taught Transcendental Meditation to thousands in places ranging from his home LA to Tanzania, S. Korea, and Nepal.  Dr. Robert Keith Wallace is a pioneering researcher on the physiology of consciousness. Dr. Wallace's findings have been published in Science, American Journal of Physiology, and Scientific American. He received his BS in physics and his PhD in physiology from UCLA, and he conducted postgraduate research at Harvard University. Dr. Wallace is founding president and member of the board of trustees of Maharishi University of Management (MUM) in Fairfield, Iowa. He is Co-Dean of the College of Perfect Health and Professor and Chairman of the Department of Physiology and Health. Mike Love is an American singer and songwriter who co-founded the Beach Boys with his cousins Brian, Dennis, and Carl Wilson and their friend Al Jardine. Characterized by his nasal tenor and occasional bass-baritone singing, Love has been one of the band's vocalists and lyricists for their entire career, contributing to each of their studio albums and serving as their frontman for live performances. During the mid-1960s, he was one of Brian's main collaborators, co-writing hit records such as "Fun, Fun, Fun" (1964), "I Get Around" (1964), "Help Me, Rhonda" (1965), "California Girls."