Slaughterhouse: The Shocking Story of Greed, Neglect, And Inhumane Treatment Inside the U.S. Meat Industry (Paperback) 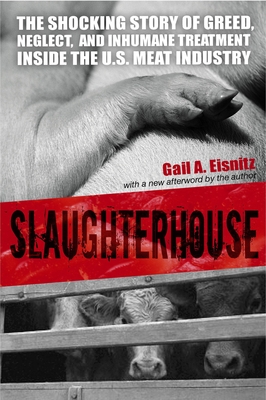 Slaughterhouse: The Shocking Story of Greed, Neglect, And Inhumane Treatment Inside the U.S. Meat Industry (Paperback)

By Gail A. Eisnitz


Not On Our Shelves—Ships in 1-5 Days
Slaughterhouse is the first book of its kind to explore the impact that unprecedented changes in the meatpacking industry over the last twenty-five years — particularly industry consolidation, increased line speeds, and deregulation — have had on workers, animals, and consumers. It is also the first time ever that workers have spoken publicly about what’s really taking place behind the closed doors of America’s slaughterhouses.

In this new paperback edition, author Gail A. Eisnitz brings the story up to date since the book’s original publication. She describes the ongoing efforts by the Humane Farming Association to improve conditions in the meatpacking industry, media exposés that have prompted reforms resulting in multimillion dollar appropriations by Congress to try to enforce federal inspection laws, and a favorable decision by the Supreme Court to block construction of what was slated to be one of the largest hog factory farms in the country.

Nonetheless, Eisnitz makes it clear that abuses continue and much work still needs to be done
Gail A. Eisnitz, winner of the Albert Schweitzer Medal for outstanding achievement in animal welfare, is the chief investigator for the Humane Farming Association. Her work has resulted in exposés by ABC’s Good Morning America, PrimeTime Live, and Dateline NBC, and her interviews have been heard on more than 1,000 radio stations. Her work has been featured in such newspapers as the New York Times, Miami Herald, Detroit Free Press, Texas Monthly, Denver Business Journal, Los Angeles Times, and US News & World Report. Eisnitz was the driving force behind a front-page exposé in the Washington Post documenting slaughterhouse atrocities. The Washington Post reporter later described Eisnitz as "the most courageous investigator I’ve ever seen." The story was one of the highest reader-response pieces ever run by the Washington Post.
"As Eisnitz convincingly shows, the meat industry is indifferent to animal suffering, exploitative of its workers, and liable to produce a product that is riddled with dangerous bacteria. Whether you eat meat or not — if you care about humans or animals — this book is a must read."
Peter Singer, Princeton University
Author of In Defense of Animals and Animal Liberation

"This book penetrates the veil of psychic numbing that keeps us oblivious to the real truth behind modern meat. If you want to remain a prisoner of your own ignorance, don't read it. It will make you aware. It will wake you up. It will change your life." ."
John Robbins, Founder of the EarthSave Foundation
Author of Diet for a New America