Stars: A Month-By-Month Tour of the Constellations: With Your Guide Mike Lynch (Spiral) 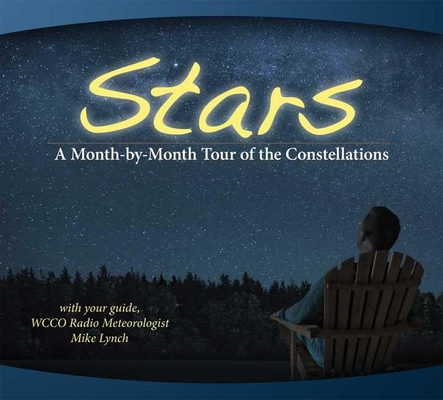 Stars: A Month-By-Month Tour of the Constellations: With Your Guide Mike Lynch (Spiral)

Grab your lawn chair, a pair of binoculars, and head outside with your guide to the night sky. Beloved WCCO Radio meteorologist Mike Lynch points out constellations, galaxies and other fascinating features in the stars above. With his friendly tips, warm anecdotes and step-by-step instructions, Mike will help you "make the stars your old friends."

Listen while you look Visit www.AdventurePublications.net to get the book's supplemental audio files.

For decades, WCCO Radio meteorologist Mike Lynch has been building telescopes, teaching classes on astronomy, and guiding tours of the stars.

Mike Lynch is a native Minnesotan who grew up in Richfield, Minnesota, in the 1960s. He attended Saint Peter's Catholic School and Holy Angels High School. After two years at the University of Minnesota in the Twin Cities, he transferred to the University of Wisconsin-Madison and earned his B.S. degree in Meteorology in 1979. Shortly afterward, he was hired as a broadcast meteorologist at WCCO Radio in Minneapolis and has been there for over 30 years. Mike has covered all kinds of weather, from deadly tornadoes to record cold snaps. In fact, on February 2, 1996, he broadcast from Tower, Minnesota, when the temperature dropped down to 60 degrees below zero, an all-time record low for the state of Minnesota. Since he was a teenager, Mike's other passion has been astronomy. He built his first telescope when he was 15 years old. For over 40 years, Mike has been teaching classes and hosting star parties with community education groups, nature centers, and other entities throughout Minnesota and Western Wisconsin. His goal is to help people make the stars their old friends. From 2004 to 2007, Mike wrote astronomy/stargazing books for Voyageur Press. He wrote state-specific books for Minnesota, Wisconsin, Iowa, the Dakotas, Michigan, New York, Ohio, Pennsylvania, New England, New Jersey, the Carolinas, Florida, Georgia, Texas, Wyoming, Washington, Oregon, California, New Mexico, Arizona, Montana and Southern Canada. In 2007, Mike Lynch also wrote "Mike Lynch's Minnesota WeatherWatch," which was a finalist in the recent Minnesota Book Awards.On top of that, Mike also writes a weekly Starwatch column for the St. Paul Pioneer Press. His column is syndicated in more than two dozen other newspapers across the United States. Mike lives in Eagan, Minnesota, with his wife Kathy and their two children, Angie and Shaun.