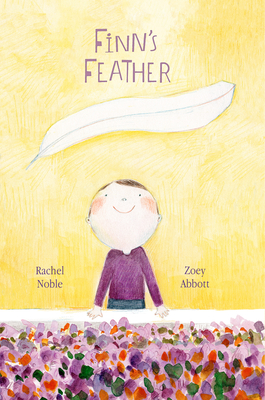 
On Our Shelves Now at:
Finn knows his brother is gone. But he also knows that Hamish sent the beautiful white feather on his doorstep.

Finn runs to show his mother the feather from Hamish, but she only gives him a big hug. In school, Finn's teacher responds similarly. Why isn't anyone as excited as he is? Finn sits quietly, cradling the beautiful, amazing feather. "Why did Hamish give it to you?" asks his friend, Lucas. "Maybe he wanted to say hi?" wonders Finn. "Maybe," Lucas says, "Hamish wanted you to have fun with it." Finn's Feather is a story about resilience and memory--about a child, his brother, and a friend who meets him where he is.

A Choosing Therapy Best Grief Book for Children for 2022

Rachel Noble enjoys writing for children, particularly stories that sensitively empower them to navigate big feelings. Rachel loves rainbows, the beach and of course, feathers. She is lucky to get all of this in Queensland Australia, where she lives. She was inspired to write Finn's Feather following the loss of her son Hamish in 2012. After Rachel got the idea for this story, she found a feather on her doorstep. Rachel has five beautiful children (including her beloved Hamish), and a patient husband. Rachel worked as a journalist, radio producer and voice-over artist before she became an author. www.rachelnobleauthor.com Zoey Abbott is a grown-up, but she still has more questions than answers. She also feels like she knew something important when she was a kid, something that she has forgotten. So Zoey time travels in her mind, digging and scraping and scooping up old sticks and bones. She sometimes puts these in her stories.