The Servile Mind: How Democracy Erodes the Moral Life (Paperback) 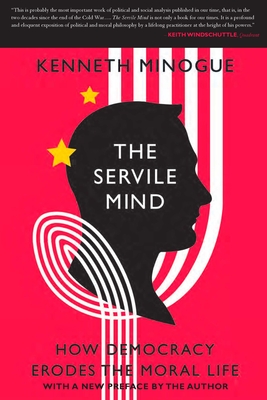 The Servile Mind: How Democracy Erodes the Moral Life (Paperback)


Special Order—Subject to Availability
One of the grim comedies of the twentieth century was that miserable victims of communist regimes would climb walls, swim rivers, dodge bullets, and find other desperate ways to achieve liberty in the West at the same time that progressive intellectuals would sentimentally proclaim that these very regimes were the wave of the future. A similar tragicomedy is playing out in our century: as the victims of despotism and backwardness from Third World nations pour into Western states, academics and intellectuals present Western life as a nightmare of inequality and oppression. In The Servile Mind: How Democracy Erodes the Moral Life, Kenneth Minogue explores the intelligentsia's love affair with social perfection and reveals how that idealistic dream is destroying exactly what has made the inventive Western world irresistible to the peoples of foreign lands. The Servile Mind looks at how Western morality has evolved into mere "politico-moral" posturing about admired ethical causes--from solving world poverty and creating peace to curing climate change. Today, merely making the correct noises and parading one's essential decency by having the correct opinions has become a substitute for individual moral responsibility. Instead, Minogue argues, we ask that our governments carry the burden of solving our social--and especially moral--problems for us. The irony is that the more we allow the state to determine our moral order, the more we need to be told how to behave and what to think. Such is the servile mind.

Kenneth Minogue is an emeritus professor of political science at the London School of Economics. He has written books on liberalism, nationalism, the idea of a university, the logic of ideology, and, more recently, democracy and the moral life. He has reviewed in many places, and has been a columnist for The Times, the Times Higher Education Supplement, and other outlets. His most recent books include Politics: A Very Short Introduction (Oxford University Press), and an edited volume, Essays in Conservative Realism. In 1986, he presented a six-part television series about libertarian economics called The New Enlightenment on Channel Four. It was repeated in 1988. He was the chairman of the Bruges Group from 1991 to 1993, and is on the board of the think tank Civitas. He was born in New Zealand and educated in Australia.