The Revolt Against the Masses: How Liberalism Has Undermined the Middle Class (Paperback) 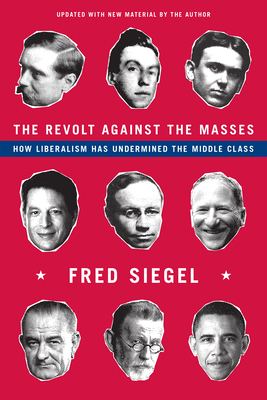 The Revolt Against the Masses: How Liberalism Has Undermined the Middle Class (Paperback)


Backordered
What we think of as liberalism today--the top and bottom coalition we associate with President Obama--began not with Progressivism or the new deal, but rather in the wake of the post-WWI disillusionment with American society. The Revolt Against the Masses explores the inner life of American liberalism over the past 90 years, beginning with liberalism's foundational writers and thinkers--such as Herbert Croly, Randolph Bourne, H.G. Wells, Sinclair Lewis, and H.L. Mencken--who despised the new worlds of mass production, mass politics, mass culture. These liberals sought to establish a true aristocracy that would serve as a counterpoint to the debasements of modern society. It was then in the seminal 1920s, that the strong strain of snobbery and contempt for the middle class, so pervasive today in the Hamptons, the New Yorker, HBO, and the Sierra Club, first defined liberalism. Today's brand of Barack Obama liberalism has gone further, displacing the old Main Street middle class with public sector workers, crony capitalists, and those elite arbiters of style and taste Siegel calls the liberal gentry. The Revolt Against the Masses explains how this came to be and why liberals continue to insist they act on behalf of the best interests of the middle class, even if the damned fools don't know it.
Fred Siegel is the author, most recently, of The Prince of the City: Giuliani, New York, and the Genius of American Life (2005), which received the cover review in the New York Times Book Review. His previous book, The Future Once Happened Here: New York, D.C., L.A., and the Fate of America's Big Cities, was named by Peter Jennings as one of the 100 most important books about the U.S. in the twentieth century. He has written widely on American and European politics and was described as "the historian of the American city" in a November 2011 profile in the Wall Street Journal. The former editor of City Journal, he has written for the Wall Street Journal, the New York Times, The Atlantic, Commentary, The New Republic, Dissent, and many other publications. He has also appeared widely on TV and radio. A former senior fellow at the Progressive Policy Institute in Washington, D.C., Mr. Siegel is currently a scholar in residence at St. Francis College in Brooklyn and a senior fellow at the Manhattan Institute.