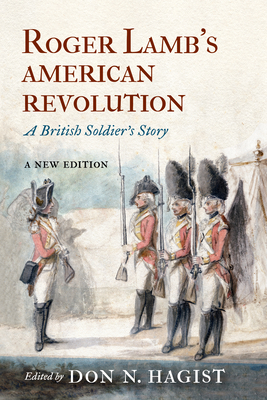 
On Our Shelves Now at:
Of all the British soldiers who served in North America during the American Revolution, none wrote more about his experiences than Roger Lamb. He certainly had a lot to say: his service in two of the most important campaigns—the 1777 Saratoga campaign and the 1781 campaign through the Carolinas to Virginia—put him in the thick of some of the war’s most famous battles. Moreover, he was twice captured and twice escaped, making his way through hostile territory to rejoin the British army. Later in his life he wrote two books chronicling these experiences in great detail. Hundreds of British soldiers went through similar ordeals, sharing in the campaigns, the battles, the captivities, the escapes, but none recounted any aspect of these activities in the level of detail that Lamb did.
The first edition of this book, published in 2004, combined all of Roger Lamb’s first-hand recollections from his two books, An Original and Authentic Journal of Occurrences during the late American War, from its Commencement to the Year 1783 (Dublin, 1809) and Memoir of his Own Life (Dublin, 1811). Since that publication, two more important documents written by Lamb have come to light—an intelligence report written in 1782 recounting details of one of his escapes, and a “commonplace book” kept later in his life to record a vast range of memories, thoughts, and observations. Roger Lamb’s American Revolution: A British Soldier’s Story combines all of the material from these four sources pertaining to Lamb’s career as a soldier, from the time he joined the army to his departure from it, plus his recollections of childhood and post-military life. The result is the most comprehensive first-hand account by a British soldier in the American Revolution, an essential record for understanding the war in its totality.
Don N. Hagist is managing editor of the Journal of the American Revolution. An expert on the British army in the American Revolution, he is the author of many books and articles, including the award-winning Noble Volunteers: The British Soldiers Who Fought the American Revolution, British Soldiers, American War : Voices of the American Revolution, The Revolution's Last Men: The Stories Behind the Photographs, and Wives, Slaves, and Servant Girls: Advertisements for Female Runaways in American Newspapers, 1770–1783. He lives in Providence, Rhode Island.