Advancing in Tae Kwon Do (Paperback) 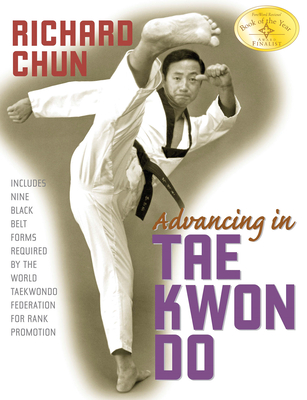 Advancing in Tae Kwon Do (Paperback)

Originally published in 1983, this authoritative work has been the guide for thousands of Taekwondo Black Belts as they advanced in their training. Whether your training is for self-defense, forms competition, or for preparation for Olympic games, this newly revised edition provides beginner/intermediate to advance level training to assist you on your journey in Taekwondo.

The popularity of Taekwondo is ever increasing. This is apparent in the tens of millions of practitioners worldwide, and by the inclusion of Taekwondo in the summer Olympic games. With all its popularity, it is paramount that the art be handed down in a clear, knowledgeable, and sustainable way - this book does just that.

Grandmaster Richard Chun began studying Taekwondo at the age of 11 under two highly repected teachers in Seoul, Korea: Chon Soo Hong and Ki Whang Kim. He progressed to 9th Dan by Kukkiwon in 1989 (World Taekwondo Federation) and Moo Duk Kwan in 1981 after more than fifty years of study, establishing him as one of the highest ranking master instructors in the United States.