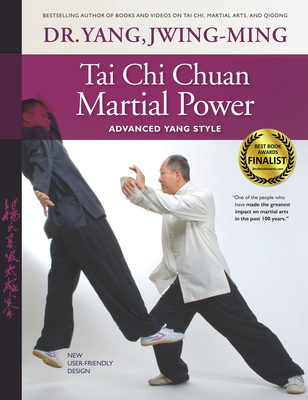 This book is written especially for those who have learned the Tai Chi form, have begun Pushing Hands, and now want to develop and refine their Tai Chi skills.

Tai Chi Chuan Martial Power focuses on the martial essence of Tai Chi Chuan, an aspect many other books ignore. This book goes in-depth and explores the subject of Jing (internal martial power), general Tai Chi theory, and the application of Chi (Qi) in the Tai Chi form.

Because Jing training is essential to martial art Tai Chi, this work is a valuable reference that no serious practitioner should be without.

A must for advanced students.

This edition includes an easy-to-follow layout. Each technique is presented in four to six large photographs with detailed instructions on how to perform the movements. Motion arrows are used on the photographs to help you execute the movements correctly.

Dr. Yang, Jwing-Ming, PhD, is a world-renowned author, scholar, and teacher of Tai chi chuan. He has been involved in Chinese martial arts since 1961 and maintains over 55 schools in 18 countries. His writing and teaching include the subjects of kung fu, tai chi chuan, massage, meditation, chin na, and he is a leading authority on qigong. He is the author of over 35 books and 80 videos. Dr. Yang, Jwing-Ming resides at his California Retreat Center near Eureka California.