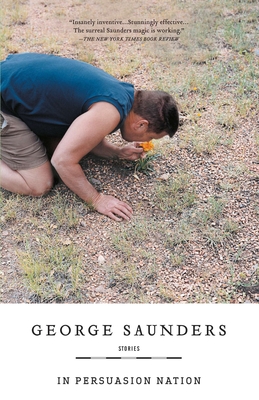 
In Stock—Click for Locations
From the #1 New York Times bestselling author of the Man Booker Prize-winning novel Lincoln in the Bardo and the story collection Tenth of December, a 2013 National Book Award Finalist for Fiction.

Talking candy bars, baby geniuses, disappointed mothers, castrated dogs, interned teenagers, and moral fables—all in this hilarious and heartbreaking collection from an author hailed as the heir to Kurt Vonnegut and Thomas Pynchon.

"The first thing you ought to know is that Saunders is the funniest writer in America... [But] Saunders's laughs are a cover, a diversion, beneath which reside some profoundly serious intentions regarding the morality of how we live and the power of love and immanent death to transform us into vastly better creatures... I can't think of another writer who would try to do what Saunders is doing, or anything close to it. This is an important book."—The Nation

"Saunders is a hilarious, wicked, and pitch-perfect satirist of our times, of course, but for a satirist he has a whole lot of heart."—Esquire
George Saunders is the Man Booker Prize-winning author of Lincoln in the Bardo; Tenth of December; In Persuasion Nation; The Brief and Frightening Reign of Phil; Pastoralia; CivilWarLand in Bad Decline; The Braindead Megaphone; and a children's book, The Very Persistent Gappers of Frip. His work appears regularly in the New Yorker, Harper's and GQ. In 2006, he was awarded a MacArthur Foundation "genius grant." In 2000, The New Yorker named him one of the "Best Writers Under 40."  He is a 2013 National Book Award Finalist for Fiction. He teaches at Syracuse University.
"Back when Philip K. Dick asked, 'Do Androids Dream of Electric Sheep?' who could have imagined that George Saunders would answer?... Saunders's caustic wit, imaginative flair, and the ping-pong speed of his dialogue are on full display here." -- Los Angeles Times

"Leaves you startled and hushed, grateful to be alive and to be reading." -- Associated Press

"Ludicrously funny and outrageously prescient... Saunders's finest gift... is to construct a story of absurdist satire, then locate within it a moment of searing humanity." -- The Boston Globe