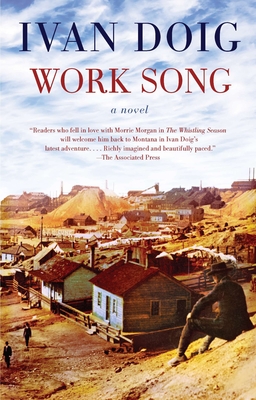 “The year is 1919, a decade after The Whistling Season, and we're once again graced with the presence of Morrie Morris, that irascible fellow who charmed us in Doig's earlier novel. He's now in Butte, Montana, and has gotten himself embroiled in the workings of the Anaconda Copper Mine, the unions, the Wobblies, the public library, and the goings-on in the boarding house where he ends up. Ivan Doig is a master of grand, old fashioned storytelling, and Work Song is storytelling at its best!”
— Vicki McNeil, Watermark Book Co., Anacortes, WA

"[A] novel that best expresses the American spirit." –The Chicago Tribune

“If America was a melting pot, Butte seemed to be its boiling point,” observes Morrie Morgan, the itinerant teacher and inveterate charmer who stole readers’ hearts in The Whistling Season. A decade later, he steps off the train and into the copper mining capital of the world in its jittery 1919 heyday. While the riches of “the Richest Hill on Earth” may elude him, once again a colorful cast of local characters seek him out. Before long, Morrie is caught up in the clash between the ironfisted Anaconda Mining Company, radical “outside agitators,” and the beleaguered miners. As tensions build aboveground and below, Morrie finds a unique way to give a voice to those who truly need one, and Ivan Doig proves yet again why he’s reigning king of Western fiction.
Often called the dean of writers about the American West, Ivan Doig is the author of such national bestsellers as The Whistling Season and The Bartender's Tale. His work has been translated into Spanish, Japanese, German, and Finnish, and his honors include seven regional booksellers awards, the Evans Biography Prize, and the Wallace Stegner Award, among others. He lives in Seattle.
"A genuinely sweet book by a writer who is generous to his characters and readers alike...start to finish Morrie proves a character in the best sense of the word...He's awfully good company...a character with whom it's a pleasure to pass the time no matter the scenery."
-Missoula Independent

"Entertaining for its rich historical take on the town of Butte...and for its evocative descriptions."
-Bookpage E-Newsletter

"A classic tale from the heyday of American capitalism by the king of the Western novel."
-The Daily Beast (Hot Reads)

"As enjoyable and subtly thought-provoking a piece of fiction as you're likely to pick up this summer. It's a book that can be appreciated just for the quality of the prose and the author's adherence to the sturdy conventions of old- fashioned narrative or for Doig's sly gloss on Western genre fiction and unforced evocation of our current condition - or, better yet, for all those things...One of this novel's pleasures is the rich cast of secondary characters Doig effortlessly sketches into his narrative...a pleasure to read."
-The Los Angeles Times

"Relax and allow yourself to be re-absorbed into a way of life that is, day by day, being lost to strip malls and strip mining...As in his previous novels, Doig excels at his descriptions of both characters and the land. ..It's hard to keep a smile off your face as you're working your way through this book. Nostalgia has found a happy home here."
-New West (starred review)

"If you were looking for a novel that best expresses the American spirit, you'd have to ride past a lot of fence posts before finding anything as worthy as Work Song.
-Chicago Tribune

"Not one stictch unravels in this intricately threaded narrative ... infectious."
-The New York Times Book Review

"Readers who fell in love with Morrie Morgan in The Whistling Season will welcome him back to Montana in Ivan Doig's latest adventure. The pages turn quickly ... Doig's love of language - more specifically, storytelling - is apparent throughout. ... Richly imagined and beautifully paced."
-Associated Press

"With deft strokes of storytelling, Doig paints a vivid scene. [He] introduces ... the most unforgettable librarian in all of American fiction [among] a reach of characters worthy of Dostoevsky. ... Doig has delivered another compelling tale about America, epic as an Old West saga but as fresh and contemporary as the news."
-The Seattle Times

"Another insightful, highly readable look at the landscape of the land and the soul...[Doig's] masterful hand takes readers skillfully into the past with a human story that echoes today ... a true treasure."
-The Billings Gazette

"More atmospheric, pleasingly old-fashioned storytelling from Doig...whose ear for the way people spoke and thought in times gone by is as faultless as ever."
-Kirkus Reviews

"The most tumultous, quirky, and fascinating city in the American West of the last century has finally found a storyteller equal to its stories. ... Ivan Doig brings to life the core of humanity, and a hell of cast, amidst the shadows and sorrows of Butte, Montana -- a city that could say it never slept well before New York made a similar claim."
-Tim Egan, author of The Last Hard Time and The Big Burn

"Butte is by far the most colorful town in Montana, a kaleidoscope of culture, commerce and copper mines, the perfect palette for an artist like Ivan Doig. Work Song doesn't just hum along-its rich authenticity echoes and resonates."
-Jamie Ford, author of The Hotel on the Corner of Bitter and Sweet