Going Down for Air: A Memoir in Search of a Subject (Hardcover) 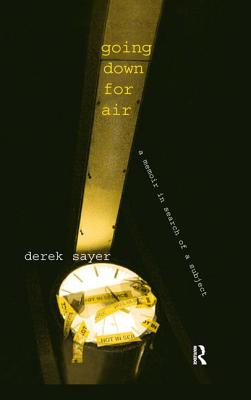 Going Down for Air: A Memoir in Search of a Subject (Hardcover)


Not On Our Shelves—Ships in 1-5 Days
(This book cannot be returned.)
What is hidden in the taste of a madeleine - or in snatches of Bob Dylan songs, operatic arias, and the remembered sting of a rattan cane? An exploration of memory, Going Down for Air artfully combines two very different yet connected texts. A Memoir is richly evocative not only of times past, but also of a very English, imperial, queerly masculine subjectivity, caught on the cusp of the extinction of the world in and of which it made sense. Derek Sayer's allusive writing succeeds as few have done before in capturing the leaps and bounds of memory itself. Rich in its detail, unstinting in its honesty, this beautifully written memoir is a considerable literary achievement. The memoir is complemented by Sayer's provocative theoretical essay on memory and social identity. Drawing on linguistic and psychoanalytic theory, photographic images, and literary texts, In Search of a Subject argues that it is memory above all that maintains the imagined identities upon which society rests. Going Down for Air is a bold and strikingly successful literary and sociological experiment, which makes a major contribution to understanding how our memories work - and gives them social meaning far beyond.