Geekerella: A Fangirl Fairy Tale (Once Upon A Con #1) (Hardcover) 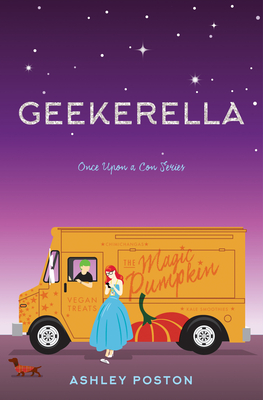 Geekerella: A Fangirl Fairy Tale (Once Upon A Con #1) (Hardcover)

This is book number 1 in the Once Upon A Con series.

Cinderella goes to the con in this fandom-fueled twist on the classic fairy tale romance.

Part romance, part love letter to nerd culture, and all totally adorbs, Geekerella is a fairy tale for anyone who believes in the magic of fandom. Geek girl Elle Wittimer lives and breathes Starfield, the classic sci-fi series she grew up watching with her late father. So when she sees a cosplay contest for a new Starfield movie, she has to enter. The prize? An invitation to the ExcelsiCon Cosplay Ball, and a meet-and-greet with the actor slated to play Federation Prince Carmindor in the reboot. With savings from her gig at the Magic Pumpkin food truck (and her dad’s old costume), Elle’s determined to win…unless her stepsisters get there first.

Teen actor Darien Freeman used to live for cons—before he was famous. Now they’re nothing but autographs and awkward meet-and-greets. Playing Carmindor is all he’s ever wanted, but the Starfield fandom has written him off as just another dumb heartthrob. As ExcelsiCon draws near, Darien feels more and more like a fake—until he meets a girl who shows him otherwise.
Ashley Poston loves dread pirates, moving castles, and starry night skies. When not geeking out at comic-cons, she lives in South Carolina with her cat named Pepper. She is the author of The Dead Romantics, the Heart of Iron duology, and the Once Upon a Con series. She can be found online at ashposton.com.
Spring 2017 Kids Indie Next List Pick
2017 Goodreads Choice Award finalist for Best Young Adult Fiction
Named to Seventeen's 2017 "12 Life-Changing Books You Have to Read This Summer" List

“Geekerella has ‘must-read’ written all over it. A fun romantic comedy with coming-of-age sensibilities and authentically voiced teens, this novel hits all the YA book-love buttons. Geekerella is simply delightful.”—USA Today's Happy Ever After

“Fairytale and fandom collide in this sweet, heartfelt, entertaining rom-com.”—Bustle

“Pay attention, fangirls, because Ashley Poston’s Geekerella is about to be your favorite YA romance.”—Sweety High

“The geekiest spin on Cinderella you'll ever read.”—Hypable

“Geeks and non-geeks will discover their inner fangirl when they fall for this fan-tastic book that celebrates fan-doms, fan-tasy, and 'shipworthy romance’.”—Justine

“This geeky twist on a classic Cinderella story is honestly the most adorable thing ever!”—Her Campus

“This charming and funny twist on Cinderella is the perfect YA fandom fairytale.” —BNTeen blog

“With geekily adorable characters, a show that’s part Star Trek and part Firefly, a cosplay contest, and a food truck fairy godmother, this is a love letter to fandom. Required reading for geeks everywhere.”—Booklist

“A celebration of fandom and happily ever afters, this feel-good reimagining hits all the right notes.”—Publishers Weekly