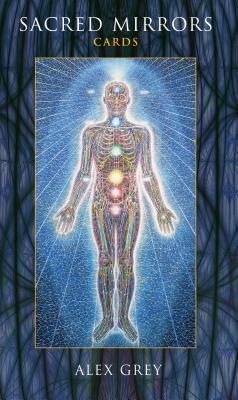 The Sacred Mirrors are a journey through our physical, socio-political, and spiritual anatomy. Sacred Mirrors Cards contains twenty-three meditation cards featuring reproductions of all twenty-one of Alex Grey’s Sacred Mirrors paintings plus two additional transformative images: Oversoul and The Angel. Grey’s visionary poetry on the back of each card leads the meditator through contemplation of the image on the front of the card, culminating in a one-word theme for reflection. The twenty-three cards in this boxed set lead the viewer through the process of theosis--that is, coming closer to God--through contemplation of iconic archetypes and seeing oneself, each other, and the world as a reflection of the divine. The original 46” x 84” Sacred Mirrors paintings featured in the Sacred Mirrors Cards are on display at the Chapel of Sacred Mirrors in New York City.
Alex Grey is the author of Sacred Mirrors and The Mission of Art. His work has graced the album covers of Nirvana and the Beastie Boys, has appeared in Newsweek, and has been exhibited around the world, including the New Museum and Stux Gallery in New York City, the Grand Palais in Paris, and the ARK exhibition space in Tokyo. In 1999 the Museum of Contemporary Art in San Diego honored Grey with a mid-career retrospective. He lives in New York with his wife, artist Allyson Grey, and their daughter, actress Zena Grey. In 2019, Alex Grey was cited as one of the "100 Most Spiritually Influential Living People in the World" according to Watkins Mind Body Spirit magazine.
“Alex Grey’s Sacred Mirrors, like all great transcendental art, are not merely symbolic or imaginary; they are a direct invitation to recognize and realize a deeper dimension of our very own being.”
— Ken Wilber, author of The Marriage of Sense and Soul

"Mr. Grey's paintings present man as an archetypal being struggling toward cosmic unity. Grey's vision of a flawed but perfectible mankind stands as an antidote to the cynicism and spiritual malaise prevalent in much contemporary art."
— The New York Times

"If you are looking for something different to aid you in your inner journey, this deck could provide you with some interesting perspectives."
— Ladyfogg's Deck Reviews, Nov 2006

". . . they are wonderful keys to self-understanding, operating in a manner similar to other decks but with a specific focus not available elsewhere. Tarot readers will relish their approach."
— Diane C. Donovan, California Bookwatch, Feb 2007

". . . some of the cards would be well worth framing as pieces of art in themselves."
— Jae Napolitano, Facing North, Mar 2007