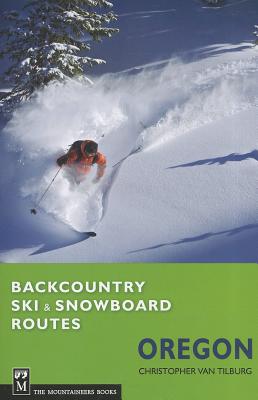 The first guidebook in a new Backcountry Ski & Snowboard Series from Mountaineers Books, Backcountry Ski & Snowboard Routes: Oregon describes nearly 100 of the best and most classic mountain routes that will exhilarate and challenge winter backcountry seekers. Although many of these routes are geared toward intermediate and expert skiers and boarders, there are also appropriate routes for those just getting into the backcountry for the first time. Full state coverage includes more than 30 routes on Mount Hood alone, and ranges across Mount Jefferson, the Three Sisters and Bend area, Willamette Pass and Mount Bailey, Crater Lake National Park, the southern Cascades, Steens, and the Wallowas and Blue Mountains regions.

There are also classic routes just over the borders -- Mount Shasta and Lassen Peak in Northern California and Mount St. Helens, Mount Adams, and Muir Snowfield in Washington. Many of these routes are selected for their straightforward approaches. Sections describe avalanche safety, best resources, gear, Oregon backcountry laws, and routes by best season and skill level. This is a guidebook to get snowboarders and skiers out in the mountains for quality fun