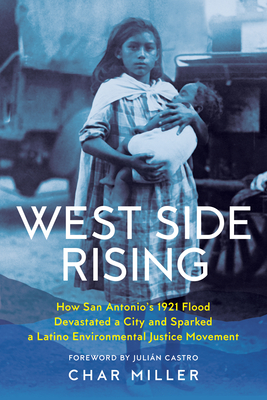 
Not On Our Shelves—Ships in 1-5 Days
On September 9, 1921, a tropical depression stalled just north of San Antonio and within hours overwhelmed its winding network of creeks and rivers. Floodwaters ripped through the city's Latino West Side neighborhoods, killing more than eighty people. Meanwhile a wall of water crashed into the central business district on the city's North Side, wreaking considerable damage. The city's response to this disaster shaped its environmental policies for the next fifty years, carving new channels of power. Decisions about which communities would be rehabilitated and how thoroughly were made in the political arena, where the Anglo elite largely ignored the interlocking problems on the impoverished West Side that flowed from poor drainage, bad housing, and inadequate sanitation. Instead the elite pushed for the $1.6 million construction of the Olmos Dam, whose creation depended on a skewed distribution of public benefits in one of America's poorest big cities. The discriminatory consequences, channeled along ethnic and class lines, continually resurfaced until the mid-1970s, when Communities Organized for Public Services, a West Side grassroots organization, launched a successful protest that brought much-needed flood control to often inundated neighborhoods. This upheaval, along with COPS's emergence as a power broker, disrupted Anglo domination of the political landscape to more accurately reflect the city's diverse population. West Side Rising is the first book focused squarely on San Antonio's enduring relationship to floods, which have had severe consequences for its communities of color in particular. Examining environmental, social, and political histories, Char Miller demonstrates that disasters can expose systems of racism, injustice, and erasure and, over time, can impel activists to dismantle these inequities. He draws clear lines between the environmental injustices embedded in San Antonio's long history and the emergence of grassroots organizations that combated the devastating impact floods could have on the West Side.