Our Daily Poison: From Pesticides to Packaging, How Chemicals Have Contaminated the Food Chain and Are Making Us Sick (Hardcover) 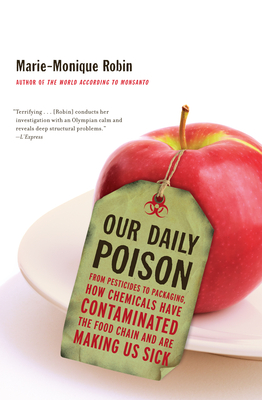 Our Daily Poison: From Pesticides to Packaging, How Chemicals Have Contaminated the Food Chain and Are Making Us Sick (Hardcover)


Not On Our Shelves—Ships in 1-5 Days
Over the last thirty years, we have seen an increase in rates of cancer, neurodegenerative disease, reproductive disorders, and diabetes, particularly in developed countries. At the same time, since the end of World War II approximately 100,000 synthetic chemical molecules have invaded our environment--and our food chain. In Our Daily Poison, award-winning journalist and documentary filmmaker Marie-Monique Robin investigates the links between these two concerning trends, revealing how corporate interests and our ignorance about these invisible poisons may be costing us our lives. The result of a rigorous two-year-long investigation that took Robin across three continents (North America, Europe, and Asia), Our Daily Poison documents the many ways in which we encounter a shocking array of chemicals in our everyday lives--from the pesticides that blanket our crops to the additives and plastics that contaminate our food--and their effects on our bodies over time. Gathering as evidence scientific studies, testimonies of international regulatory agencies, and interviews with farm workers suffering from acute chronic poisoning, Robin makes a compelling case for outrage and action.
Marie-Monique Robin is an award-winning French journalist and filmmaker. She received the 1995 Albert Londres Prize, awarded to investigative journalists in France. She is the director and producer of over thirty documentaries and investigative reports filmed in Latin America, Africa, Europe, and Asia. She lives outside Paris. Allison Schein and Lara Vergnaud hold Master's degrees in French-English Literary Translation from New York University. Both translators live in New York City.