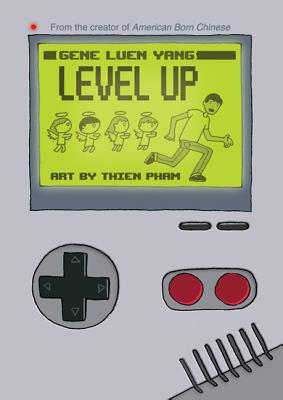 Gene Luen Yang is the National Ambassador for Young People's Literature and is a MacArthur Fellow, a recipient of what's popularly known as the MacArthur "Genius" Grant.

Which will win the battle for our hero's attention in Gene Luen Yang's new graphic novel?

Dennis Ouyang lives in the shadow of his parents' high expectations. They want him to go to med school and become a doctor. Dennis just wants to play video games—and he might actually be good enough to do it professionally.

But four adorable, bossy, and occasionally terrifying angels arrive just in time to lead Dennis back onto the straight and narrow: the path to gastroenterology. It's all part of the plan, they tell him. But is it? This powerful piece of magical realism brings into sharp relief the conflict many teens face between pursuing their dreams and living their parents'.

Partnered with the deceptively simple, cute art of newcomer Thien Pham, Gene Yang has returned to the subject he revolutionized with American Born Chinese. Whimsical and serious by turns, Level Up is a new look at the tale that Yang has made his own: coming of age as an Asian American.

Gene Luen Yang writes, and sometimes draws, comic books and graphic novels. As the Library of Congress’ fifth National Ambassador for Young People’s Literature, he advocates for the importance of reading, especially reading diversely. American Born Chinese, his first graphic novel from First Second Books, was a National Book Award finalist, as well as the winner of the Printz Award and an Eisner Award. His two-volume graphic novel Boxers & Saints won the L.A. Times Book Prize and was a National Book Award Finalist. His other works include Secret Coders (with Mike Holmes), The Shadow Hero (with Sonny Liew), New Super-Man from DC Comics (with various artists), and the Avatar: The Last Airbender series from Dark Horse Comics (with Gurihiru). In 2016, he was named a MacArthur Foundation Fellow.

THIEN PHAM is a comic book and visual artist, based in the Bay Area. He is also a high school teacher. Pham illustrated Gene Luen Yang's Level Up. Sumo is his first solo work.