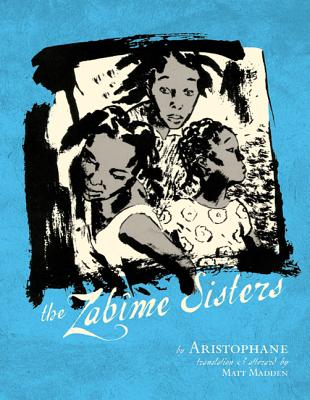 Master storyteller Aristophane's The Zabime Sisters takes a keen look at some of the universal experiences of children on the cusp of growing up, in the fascinating setting of Guadeloupe. Aristophane's bold, graphic brushwork weaves a wild texture through this gentle, clear-eyed tale.

On the first day of summer vacation, teenaged sisters M'Rose, Elle, and Célina step out into the tropical heat of their island home and continue their headlong tumble toward adulthood. Boys, schoolyard fights, petty thievery, and even illicit alcohol make for a heady mix, as The Zabime Sisters indulge in a little summertime freedom. The dramatic backdrop of a Caribbean island provides a study of contrasts—a world that is both lush and wild, yet strangely small and intimate—which echoes the contrasts of the sisters themselves, who are at once worldly and wonderfully naïve.

Aristophane Boulon, who published under his first name, was trained as a fine artist before moving into the world of narrative art, where he made an immediate splash in the French comics world. Not quite ten years after the initial publication of Les Soeurs Zabîme, Aristophane died in 2007. He is deeply missed.

Matt Madden is a comics creator and teacher at New York's School of Visual Arts. He is the creator of the graphic novels Black Candy, Odds Off, and A Fine Mess, and of the comics theory book 99 Ways to Tell a Story. He is the co-editor (with Jessica Abel) of the Best American Comics series. He lives in Brooklyn, NY.

Aristophane Boulon, who published under his first name, was trained as a fine artist before moving into the world of narrative art, where he made an immediate splash in the French comics world. Not quite ten years after the initial publication of Les Soeurs Zabîme, Aristophane died in 2007. He is deeply missed.

“[The sisters] engage in universal childhood pursuits that Tom Sawyer himself would have recognized: exploring the dangerous parts of the forest, stealing mangoes from the wrong orchard, sneaking a taste of rum to their own detriment. The writer proves deft at revealing the politics of childhood...and the white expanses and thick, inky lines of his art readily evoke not only the proper emotions but also the sun-drenched environment. Lyrical, even literary in its tone, The Zabime Sisters is for developed readers looking for something off the beaten path.” —Booklist

“This understated graphic novel manages to entertain and instruct without being overly sentimental. Its three young protagonists, M'Rose, Elle, and Celina, guide readers along a typical summer day in Guadeloupe. ... The petty arguments, betrayals, schoolyard fights, and alcohol experimentation are punctuated with several explanatory captions that take readers into the characters' minds and provide useful if occasionally obvious insight into the motives behind what the children do. ... It's a memorable and honest story that all young readers can enjoy.” —Publisher's Weekly

“The leisurely-paced day echoes the island lifestyle. The day is filled with mini-adventures and explorations around the island. Character exploration is the true story in this coming-of-age graphic novel. Each sister gains some insight into herself and the world around her as the day progresses. The artwork is beautiful in its roughness. This slim title ... has a beauty and sophistication that will appeal to higher level readers.” —VOYA