The Iridescence of Birds: A Book About Henri Matisse (Hardcover) 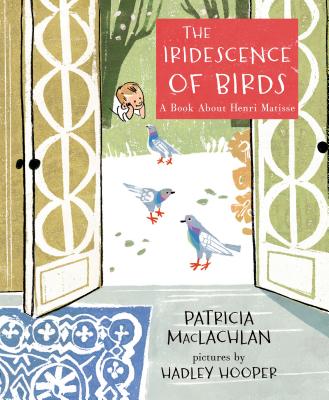 The Iridescence of Birds: A Book About Henri Matisse (Hardcover)

If you were a boy named Henri Matisse who lived in a dreary town in northern France, what would your life be like? Would it be full of color and art? Full of lines and dancing figures?

Find out in this beautiful, unusual picture book about one of the world's most famous and influential artists by acclaimed author and Newbery Medal-winning Patricia MacLachlan and innovative illustrator Hadley Hooper.

Patricia MacLachlan (1938-2022) was the award-winning author of many novels for children, including the Newbery Medal and Scott O’Dell Award-winning Sarah, Plain and Tall, which was adapted into a Hallmark television movie starring Glenn Close and Christopher Walken. She co-wrote the teleplay for the film as well as for two sequels, Skylark and Sarah, Plain and Tall: Winter’s End, based on her novels.

Honored with a Christopher Award and a National Humanities Medal among many others, MacLachlan was also the author of Baby, Waiting for the Magic, The Truth of Me, and the picture books Someone Like Me (illustrated by Chris Sheban), and The Iridescence of Birds: A Book About Henri Matisse (illustrated by Hadley Hooper).

Hadley Hooper works as an editorial illustrator for numerous magazines and newspapers. In 2011 she illustrated Here Come the Girl Scouts! by Shana Corey. The Iridescence of Birds is her second picture book and first for Roaring Brook Press. She lives in Denver, Colorado.

“A spacious and beautiful book, as much a lesson for adults on visual enrichment and nurturing a creative spirit as an introductory biography for children.” —The Horn Book

“*Glorious . . . Effective page turns and the accretion of detail in both text and illustration take readers on a journey.” —Kirkus Reviews, STARRED REVIEW

“*The book gives off a creative energy that readers of all ages will find fulfilling . . . A poetic look at creativity, both natural and nurtured.” —School Library Journal, STARRED REVIEW

“*It's a sumptuous meditation on the way artists see and feel, one that possesses an iridescence of its own.” —Publishers Weekly, STARRED REVIEW