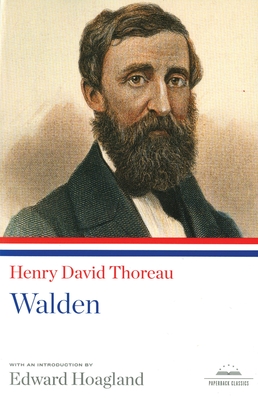 In 1845 Henry David Thoreau left his pencil-manufacturing business and began building a cabin on the shore of Walden Pond near Concord, Massachusetts. This lyrical yet practical-minded book is at once the record of the twenty-six months Thoreau spent in withdrawal from society—an account of the daily details of building, planting, hunting, cooking, and always, observing nature—and a declaration of independence from the oppressive mores and spiritual sterility of the world he left behind. Elegant, funny, profound, and quietly searching, Walden remains the most persuasive American argument for simplicity of life and clarity of conscience.

For almost thirty years, The Library of America has presented America's best and most significant writing in acclaimed hardcover editions. Now, a new series, Library of America Paperback Classics, offers attractive and affordable books that bring The Library of America's authoritative texts within easy reach of every reader. Each book features an introductory essay by one of a leading writer, as well as a detailed chronology of the author's life and career, an essay on the choice and history of the text, and notes.

The contents of this Paperback Classic are drawn from Henry David Thoreau: A Week, Walden, The Maine Woods, Cape Cod, volume number 28 in the Library of America series. That volume is joined in the series by a companion volume, number 124, Henry David Thoreau: Collected Essays and Poems.
Henry David Thoreau was born in Concord, Massachusetts in 1817. He graduated from Harvard in 1837, the same year he began his lifelong Journal. While living at Walden Pond, Thoreau worked on the two books published during his lifetime: Walden (1854) and A Week on the Concord and Merrimack Rivers (1849). Several of his other works, including The Maine Woods, Cape Cod, and Excursions, were published posthumously. Thoreau died in Concord, at the age of forty-four, in 1862.

Edward Hoagland's books include The Courage of Turtles, Walking the Dead Diamond River, Red Wolves and Black Bears, and Notes from the Century Before: A Journal from British Columbia.