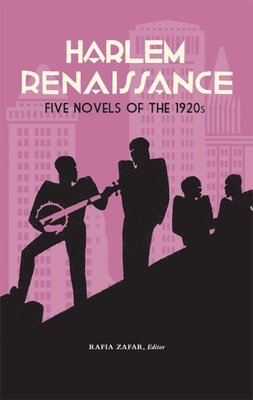 
Special Order—Subject to Availability
HARLEM RENAISSANCE: Five Novels of the 1920s leads off with Jean Toomer's Cane (1923), a unique fusion of fiction, poetry, and drama rooted in Toomer's experiences as a teacher in Georgia. Toomer's masterpiece was followed within a few years by a cluster of novels exploring black experience and the dilemmas of black identity in a variety of modes and from different angles. Claude McKay's Home to Harlem (1928), whose freewheeling, impressionistic, bawdy kaleidoscope of Jazz Age nightlife made it a best seller, traces the picaresque adventures of Jake, a World War I veteran, within and beyond Harlem. Nella Larsen's Quicksand (1928), the poignant, nuanced psychological portrait of a woman caught between the two worlds of her mixed Scandinavian and African American heritage; Jessie Redmon Fauset's Plum Bun (1928), the richly detailed account of a young art student's struggles to advance her career in a society full of obstacles both overt and insidiously concealed; and Wallace Thurman's The Blacker the Berry (1929), with its anguished, provocative look at prejudice and exclusion as it tells of a new arrival in Harlem searching for love, each in its distinct way testifies to the enduring power of the Harlem ferment.

LIBRARY OF AMERICA is an independent nonprofit cultural organization founded in 1979 to preserve our nation’s literary heritage by publishing, and keeping permanently in print, America’s best and most significant writing. The Library of America series includes more than 300 volumes to date, authoritative editions that average 1,000 pages in length, feature cloth covers, sewn bindings, and ribbon markers, and are printed on premium acid-free paper that will last for centuries.
RAFIA ZAFAR, editor, is a professor of English with joint appointments in the African & African American Studies and American Culture Studies programs at Washington University in St. Louis. She is the author of We Wear the Mask: African Americans Write American Literature, 1760-1870 (1997) and the book-length study "Fictions of the Harlem Renaissance," which appears in the sixth volume of The Cambridge History of American Literature (2002). She has also edited New Essays on Harriet Jacobs and Incidents in the Life of a Slave Girl (1996; with Deborah Garfield), and God Made Man, Man Made the Slave: The Autobiography of George Teamoh (1992; with F. N. Boney and R. L. Hume).