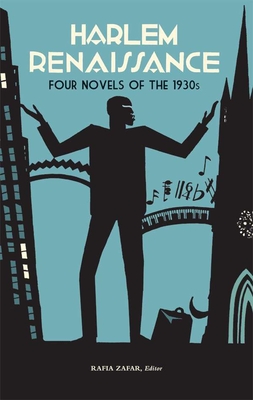 
Special Order—Subject to Availability
HARLEM RENAISSANCE: Four Novels of the 1930s traces the flowering of the Renaissance in diverse genres and forms. It opens with Langston Hughes's Not Without Laughter (1931), an elegantly realized coming-of-age tale that follows a young man from his rural origins to the big city. Suffused with childhood memories, it is the poet's only novel. George S. Schuyler's Black No More (1931), a satire founded on the science fiction premise of a wonder drug permitting blacks to change their race, skewers public figures white and black alike in a raucous, carnivalesque send-up of American racial attitudes. Considered the first detective story by an African American writer, Rudolph Fisher's The Conjure-Man Dies (1932) is a mystery that comically mixes and reverses stereotypes, placing a Harvard-educated African "conjureman" at the center of a phantasmagoric charade of deaths and disappearances. Black Thunder (1936), Arna Bontemps's stirring fictional recreation of Gabriel Prosser's 1800 slave revolt, which, though unsuccessful, shook Jefferson's Virginia to its core, marks a turn from aestheticism toward political militancy in its exploration of African American history.

LIBRARY OF AMERICA is an independent nonprofit cultural organization founded in 1979 to preserve our nation’s literary heritage by publishing, and keeping permanently in print, America’s best and most significant writing. The Library of America series includes more than 300 volumes to date, authoritative editions that average 1,000 pages in length, feature cloth covers, sewn bindings, and ribbon markers, and are printed on premium acid-free paper that will last for centuries.
RAFIA ZAFAR, editor, is a professor of English with joint appointments in the African & African American Studies and American Culture Studies programs at Washington University in St. Louis. She is the author of We Wear the Mask: African Americans Write American Literature, 1760-1870 (1997) and the book-length study "Fictions of the Harlem Renaissance," which appears in the sixth volume of The Cambridge History of American Literature (2002). She has also edited New Essays on Harriet Jacobs and Incidents in the Life of a Slave Girl (1996; with Deborah Garfield), and God Made Man, Man Made the Slave: The Autobiography of George Teamoh (1992; with F. N. Boney and R. L. Hume).