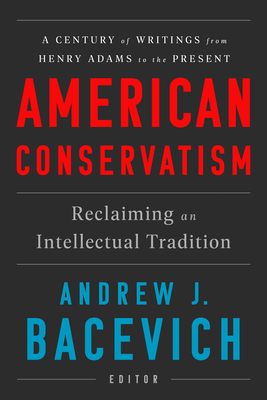 
Special Order—Subject to Availability
As the nation stands at a crossroads, this “valuable collection” urges us to reexamine the ideas and values of the American conservative tradition—offering “a bracing tonic for the present chaos” (The Washington Post).

What is American conservatism? What are its core beliefs and values? What answers can it offer to the fundamental questions we face in the twenty-first century about the common good and the meaning of freedom, the responsibilities of citizenship, and America’s proper role in the world?

As libertarians, neoconservatives, Never Trump-ers, and others battle over the label, this landmark collection offers an essential survey of conservative thought in the United States since 1900, highlighting the centrality of four key themes: the importance of tradition and the local, resistance to an ever-expanding state, opposition to the threat of tyranny at home and abroad, and free markets as the key to sustaining individual liberty.

Andrew J. Bacevich’s incisive selections reveal that American conservatism—in his words “more akin to an ethos or a disposition than a fixed ideology”—has hardly been a monolithic entity over the last 120 years, but rather has developed through fierce internal debate about basic political and social propositions. Well-known figures such as Ronald Reagan and William F. Buckley are complemented here by important but less familiar thinkers such as Richard Weaver and Robert Nisbet, as well as writers not of the political right, like Randolph Bourne, Joan Didion, and Reinhold Niebuhr, who have been important influences on conservative thinking.

More relevant than ever, this rich, too often overlooked vein of writing provides essential insights into who Americans are as a people and offers surprising hope, in a time of extreme polarization, for finding common ground. It deserves to be rediscovered by readers of all political persuasions.
Andrew J. Bacevich, editor, is professor emeritus of history and international relations at Boston University. A graduate of both the U.S. Mil- itary Academy and Princeton University, he served in the U.S. Army for twenty-three years. His recent books include The Age of Illusions: How America Squandered Its Cold War Victory, The Limits of Power, and America’s War for the Greater Middle East. His writings have appeared in The New York Times, the London Review of Books, and the American Conservative, among other publications
One of "7 Books to Watch for in April" in The New York Times

"A valuable collection. . . . Bacevich is not looking for agreement — this is neither an evangelistic credo nor a sort of Conservatism for Dummies. Rather, it is a collection of diverse thinkers generally inclined toward the causes of order and tradition, and the best articles have a solidity that can seem a bracing tonic for the present chaos." —Tim Page, The Washington Post

"A rich menu. . . . Bacevich’s selections evidence that conservative anxiety about the cultural consequences of modernity has a distinguished American pedigree."
—George F. Will, The New York Times Book Review

"Eloquent. . . . A collection of essays and speeches—mostly from the 20th century—that argue tacitly that today’s conservatism needs an intellectual reboot." —Kirkus Reviews