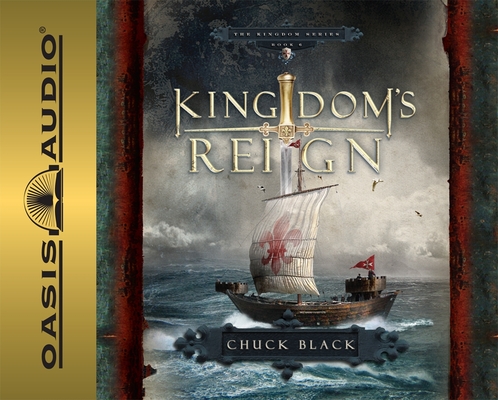 This is book number 6 in the Kingdom Series series.

While the Knights of the Prince train in the Kingdom Across the Sea, the Dark Knight, Lucius, reigns in Arrethtrae with complete authority.  But when a small group of loyalists swears allegiance to the King, the Prince returns, and in a mighty battle, Lucius and the Shadow Warriors are vanquished and imprisoned in the Wasteland.  Peace and prosperity renew the land, and the Prince rules from the royal city of Chessington.  While the heroic Cedric travels as ambassador, he sees that every corner of Arrethtrae reaps the benefits of prosperity brought to the land by the Prince’s reign.  But not everyone will swear allegiance to the King, and it seems this paradise may be lost yet again because of the pride and greed of evil men who plot to free the Dark Knight and his minions.  Cedric rides desperately to bring the news before it’s too late.  Journey to Arrethtrae in this multi-voice dramatization, where the King and His Son implement a bold plan to save their kingdom; where courage, faith, and loyalty stand tall in the face of opposition; where good will not bow to evil – where the King reigns… along with His Son!

Chuck Black spent nine years in the U.S. Air Force as a tactical communications engineer and an F-16 fighter pilot. Today, Chuck is a product design engineer and has eleven patented construction products being sold internationally. He is the author of seven novels, and has received praise from parents across the country for his unique approach to telling biblical truths. His passion is to serve Christ and to love his wife, Andrea, and their six children. He lives with his family in North Dakota.