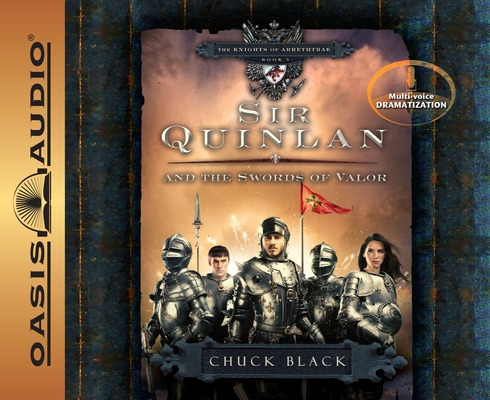 This is book number 5 in the The Knights of Arrethtrae series.

Two friends face the Dark Knight’s deadliest scheme, but only one knight has the courage to overcome. Sir Quinlan leaves his boyhood friend to serve the Prince, fighting a battle darker and more intense than any he’s ever known. The mysterious Sir Baylor recruits him into the ranks of an elite unit of knights known as the Swords of Valor, but when tragedy strikes and everyone blames Quinlan, the Swords of Valor disband, ending a legacy of heroic deeds. Alone and despairing, Quinlan wanders the kingdom, fleeing his past. His providential encounter with Taras, a mysterious Silent Warrior and former trainer of Valor Knights, offers Quinlan a chance to redeem himself and learn the ways of the secret warriors. The training is grueling, and just when Quinlan seems to have left his failures behind, he receives an impossible challenge from the Prince—one that will force him to face his past…and the mighty men who blame him for the tragedy that ruined them. Can Quinlan reunite the Valor Knights in time to save the people from the Dark Knight’s evil plot to rule the Kingdom of Arrethtrae, or will the Valor Knights lose the most important battle of all?

Chuck Black, a former F-16 fighter pilot and tactical communications engineer, is the author of eight novels, including the popular Kingdom series. He has received praise from parents across the country for his unique approach to telling biblical truths. His passion in life is to serve the Lord Jesus Christ and to love his wife, Andrea, and their six children. He lives with his family in North Dakota.