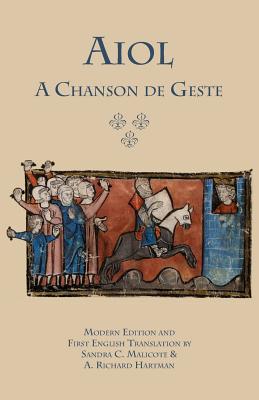 
Not On Our Shelves—Ships in 1-5 Days
(This book cannot be returned.)
This "chanson de geste" records the exploits of the young knight, Aiol, as he reclaims his father's and mother's unjustly stolen heritage. He gains the love of a Saracen princess who converts when she is convinced by Aiol's warrior's prowess of the truth of the Christian god. He then aids the French King Louis in ending a debilitating war led by rebellious vassals and (in an allusion to the Fourth Crusade) similarly helps Emperor Grasien, the king of Venice, to end his own war against an enemy to the East. Aiol's deeds ultimately bring justice to the kingdom of France. But the poem is far more than the tale itself. "Aiol" artfully recreates both the Christian culture of the West and the Islamic culture of the Levant. Poets writing in medieval French created richly textured literary metaphors or fictions about both the Christian and Muslim world, and they were themselves well aware that even though they were treating historically-based materials, they were also fabricating fictions and fictive truths, tropes and figures as literary art. Aiol's literary allusions suggest a sophistication on the part of the chanson's authors, who wrote for courts that knew well and first-hand the Muslim world. By the time of Aiol's composition there had long been fruitful cultural, trade - as well as military - interaction between the "two worlds." Islamic scholars were respected in intellectual circles in the 12th and 13th centuries, and translators briskly adapted works of Arabic science and medicine for the readers of Latin Europe. Around eighty written Old French epics are known from surviving 13th-century manuscripts. These were preserved and passed down by the aristocratic families who had commissioned them and financed their preparation. These poems, often called genealogical epics, served a number of purposes, from entertainment at important courtly occasions, such as marriages and investitures, to edification and instruction in the vernacular of the courtly world. Excerpts of these "songs of deeds" or "chansons de geste" were also publicly sung after Sunday masses for the entertainment and instruction of the ordinary people. The institutions of the monarchy, social class, marriage and the family are explored and developed in a poetic enterprise that gave life to what might otherwise have become an academic debate. Dialectical argument structures the entire work into a richly instructive, psychologically compelling and socially pleasing whole. Taken together with "Elye of Saint Gilles," "Aiol" has become known as the geste de Saint Gilles, because both poems relate events in the lives of Julien of Saint Gilles, a literary epic hero first found in "Le Couronnement de Louis," and Julien's son, Elye and Elye's son, Aiol. The two poems are preserved in only one manuscript, the richly decorated and ornamented BNFfr 25516. It has been proposed that this geste was presented at the Parisian court of King Philip Augustus upon the occasion of the lavish, festive wedding in 1212 of Jeanne of Constantinople, countess of Flanders, to Ferrand of Portugal. Jeanne was the daughter of Count Baldwin of Flanders and Hainaut, who had, during the Fourth Crusade, been elected emperor of the Latin Empire at Constantinople. Hartman and Malicote's edition and translation is based on manuscript BNFfr 25516 and on the critical editions of W. Foerster and of J. Normand and G. Raynaud. As with their edition of Elye of Saint Gilles, the editors have chosen simplicity and directness of approach. The translation remains faithful to the spirit and meaning of the Old French poem; creating a lively, interesting and engaging text that allows the reader to savor the rich intellectual and artistic context of the original. First English translation. Dual-Language Poetry. Introduction, notes, bibliography, and all eleven illustrations from the original Paris manuscript.