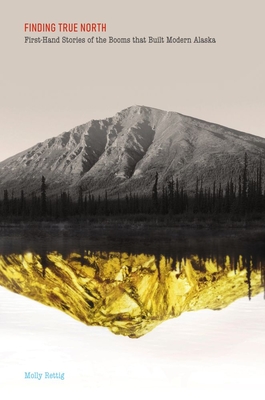 These were the images that came to mind when Molly Rettig moved to Fairbanks, Alaska to work as a reporter at the local newspaper. An avid environmentalist, she couldn’t wait to explore the vast, untamed spaces that had largely been paved over on the east coast. But when her 72-year-old neighbor, Clutch, invites her on a tour of his gold mine—an 800-foot tunnel blasted into the side of his house–she begins to question many of her ideas about Alaska, and about herself.

In Finding True North, Rettig takes us on a gripping journey through Alaska's past that brings alive the state's magnificent country and its quirky, larger-than-life characters. She meets a trapper who harvests all she needs from the land, a bush pilot who taught himself how to fly, and an archaeologist who helped build an oil pipeline through pristine wilderness. While she learns how airplanes, mines, and oil fields have paved the way for newcomers like herself, she also stumbles upon a bigger question: what has this quest for Alaska’s natural resources actually cost, and how much more is at stake?

This is a book about all the ways wild places teach us about ourselves. Rettig writes both playfully and honestly about how one place can be many things to many people—and how all of it can be true.

Molly Rettig is communications director at the Cold Climate Housing Research Center. She moved to Fairbanks to work as a reporter for the Fairbanks Daily News-Miner in 2010 and covered government, science, and education.

"This is a book about Alaska as a homeland, with its many quandaries. And about how its author, by listening to those who have long lived here, found her own home."
—Anchorage Daily News

“Molly Rettig, in her book debut, shares stories from Alaska's gold rush, airplane age and oil boom, and how Alaska changed ‘from a land of subsistence to a land of resource development.’ She blends these stories with her own, ending up with a memoir of a young, adventurous person from the East Coast, trying to come to terms with a place—and people—full of contradictions.”
—Alaska History