Don't Start the Revolution Without Me! (Paperback) 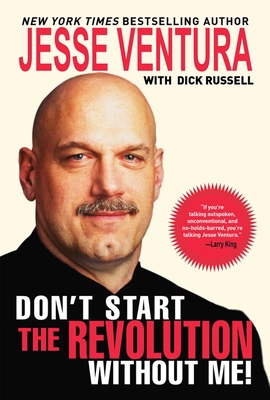 Don't Start the Revolution Without Me! (Paperback)

By Jesse Ventura, Dick Russell (With)


Special Order—Subject to Availability
Jesse Ventura has had many lives—as a Navy SEAL, as a star of pro wrestling, as an actor, and as the governor of Minnesota. His previous books, I Ain't Got Time to Bleed and Do I Stand Alone?, were both national bestsellers. Don't Start the Revolution Without Me! is the story of his controversial gubernatorial years and his life since deciding not to seek a second term as governor in 2002. Written with award-winning author Dick Russell at a secluded location on Mexico's Baja Peninsula, Ventura's bestselling book reveals for the first time why he left politics—and why he is now considering reentering the arena with a possible independent run for the presidency.

In a fast-paced and often humorous narrative, Ventura pulls no punches in discussing our corrupt two-party system, the disastrous war in Iraq, and what he suspects really happened on September 11. He provides personal insights into the Clinton and Bush presidencies, and elaborates on the ways in which third parties are rendered impotent by the country's two dominant parties. He reveals the illegal role of the CIA in states like Minnesota, sensitive and up-to-date information on the Blackwater security firm, the story of the American spies who shadowed him on a trade mission to Cuba, and what Fidel Castro told him about who really assassinated President John F. Kennedy. This unique political memoir is a must-read for anyone concerned about the direction that America will take.
Jesse Ventura is the former independent governor of Minnesota. He is also a former US Navy frogman, a professional wrestler, a movie actor, a visiting fellow at Harvard Kennedy School of Government, and the New York Times bestselling author of seven books, including American Conspiracies, 63 Documents the Government Doesn’t Want You to Read, and Don’t Start the Revolution Without Me! He was the host and executive producer of truTV’s Conspiracy Theory with Jesse Ventura, which won the Stony Award from High Times magazine in 2010. He was also the host of the political talk show Off The Grid, which aired on RT America and online at Ora.tv. He has a reputation as a rebel and a freethinker, and he has no qualms about questioning authority. He spends half the year in Baja, Mexico and the other half in his home state of Minnesota.

Dick Russell has written for such varied publications as Time, Sports Illustrated, and the Village Voice.His books include The Man Who Knew Too Much, Black Genius, and On the Trail of the JFK Assassins. He is also the coauthor of several New York Times bestsellers, including American Conspiracies, 63 Documents the Government Doesn't Want You to Read, and They Killed Our President.