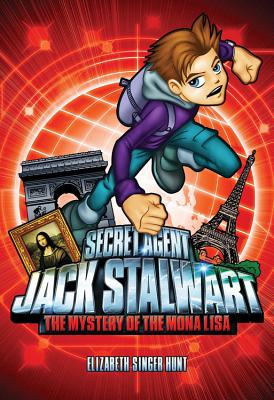 This is book number 3 in the The Secret Agent Jack Stalwart Series series.

In The Mystery of the Mona Lisa, Jack is sent to the Louvre Museum in Paris to track down the theft of the world's most beloved painting. He must match wits with a seemingly invisible mastermind in order to stop Leonardo's masterpiece from slipping into the criminal underground forever. Can Jack's Hypo-Disk overpower a glove that shoots laser beams from its fingertips? Jack's adventures in the city of light demonstrate once again that when it comes to outsmarting the baddies, Jack is the go-to agent with endless tricks up his sleeve.
Elizabeth Singer Hunt is no stranger to the world of espionage. She's the granddaughter of a former spy and author of the award-winning Secret Agent Jack Stalwart chapter book series. The series has been named a "must read" for boys by the British Education Secretary, serialized by BBC Radio, and developed into an animated TV show. She's also the creator of the Secret Agents Jack and Max Stalwart chapter book series, The Secret Agent Training Manual, and The Secret Agent Jack Stalwart iPad app.