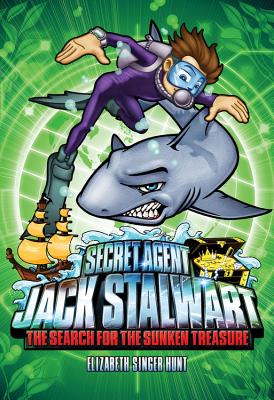 This is book number 2 in the The Secret Agent Jack Stalwart Series series.

In one of his most daring exploits, Jack goes down under -- literally -- to investigate the disappearance of a diver off the Great Barrier Reef of Australia. Using everything in his backpack arsenal from anti-puke pills to a morphing suit, an egg-shaped submarine to Disappearing Milk, he exposes a deadly nest of pirates raiding a shipwreck site. Jack has to thwart their schemes, evade their attempts on his life, and escape the primordial hunger of three deadly species: a Komodo dragon, a set of sharks, and the most poisonous predators in the reef, the Irukandji jellyfish. Can he save the treasure and the diver, not to mention himself? Canny and resourceful, Jack will delight readers and impress their parents.
Elizabeth Singer Hunt is no stranger to the world of espionage. She's the granddaughter of a former spy and author of the award-winning Secret Agent Jack Stalwart chapter book series. The series has been named a "must read" for boys by the British Education Secretary, serialized by BBC Radio, and developed into an animated TV show. She's also the creator of the Secret Agents Jack and Max Stalwart chapter book series, The Secret Agent Training Manual, and The Secret Agent Jack Stalwart iPad app.