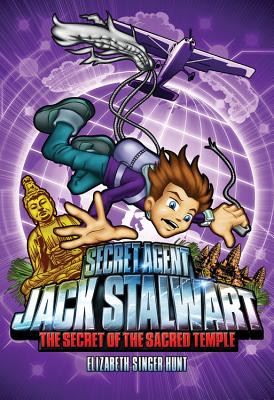 This is book number 5 in the The Secret Agent Jack Stalwart Series series.

When an archaeologist who guards the priceless 1,000-year-old treasures of the temple of Angor Wat goes missing, her daughter Kate calls on Jack to help bring her home. No sweat for a top secret agent. Except this time it's personal. The archaeologist also has information leading to the whereabouts of Jack's missing brother. Now Jack must stop a power-hungry madman before the treasure, and the archaeologist, disappear forever.
Elizabeth Singer Hunt is no stranger to the world of espionage. She's the granddaughter of a former spy and author of the award-winning Secret Agent Jack Stalwart chapter book series. The series has been named a "must read" for boys by the British Education Secretary, serialized by BBC Radio, and developed into an animated TV show. She's also the creator of the Secret Agents Jack and Max Stalwart chapter book series, The Secret Agent Training Manual, and The Secret Agent Jack Stalwart iPad app.