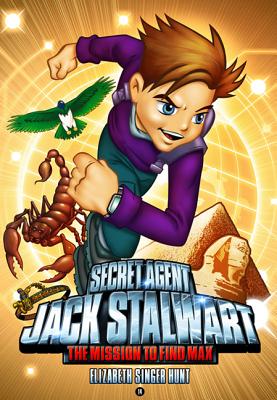 This is book number 14 in the The Secret Agent Jack Stalwart Series series.

The Mission to Find Max (Book 14) Jack joined the Global Protection Force for two reasons: to thwart evil around the world and to rescue his brother, Max, who went missing while working as a GPF agent. The GPF refused to share any details with Jack about Max's whereabouts, but on two previous missions, Jack had collected clues that pointed to Max is being in Egypt. Now Jack has reason to believe that King Tut's diadem -- a crown thought to have magical powers -- is the cause of Max's disappearance. The crown was so important that King Tut was buried with it on his head, but when the boy-pharaoh's tomb was opened in 1922, an assistant archaeologist named Omar Massri stole the artifact. Could a descendant of Massri somehow be involved in Max's disappearance? Jack and his old friend Kate must prevent an ancient and terrible curse of the pharaohs from wreaking havoc, or else Egypt -- and Jack's brother -- could be doomed.
Elizabeth Singer Hunt is no stranger to the world of espionage. She's the granddaughter of a former spy and author of the award-winning Secret Agent Jack Stalwart chapter book series. The series has been named a "must read" for boys by the British Education Secretary, serialized by BBC Radio, and developed into an animated TV show. She's also the creator of the Secret Agents Jack and Max Stalwart chapter book series, The Secret Agent Training Manual, and The Secret Agent Jack Stalwart iPad app.

VOYA (Voice of Youth Advocates), February 2012
“Each book in the series is a quick read with plenty of action and, most importantly, lots of information about history…Nonetheless, the educational purpose of the books does not take too much away from Jack’s adventures…Best of all, throughout the series, the young characters come out on top, which is always fun to read.”