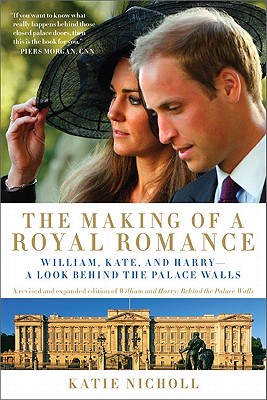 
Special Order—Subject to Availability
William and Harry was an overnight sensation when it was published a week before Prince William and Kate Middleton's engagement announcement in November 2010. Now the author, a royal insider and the royal correspondent for The Daily Mail, has updated and added crucial material that completes the story of the fairytale romance. In addition to providing fascinating insight into the lives and loves of two young men who are very much in the public spotlight worldwide, this updated version now becomes the definitive book that brings their story -- and that of Kate Middleton, the future Queen Catherine -- up to date.

With a new preface, an epilogue, and two new chapters, the author now fully reveals the secret marriage pact that William and Kate have had for several years, dispelling the notion that Kate Middleton has been "Waity Katie." It paints a portrait of Kate by looking back at her family and childhood, her close friends and former boyfriends, and her ever-present devotion to the love of her life, Prince William. It reveals the domestic life that the two have been living in Wales, and provides a look at what the future holds for their new commitment. The epilogue focuses on the wedding preparations.

The book will be the most authoritative and entertaining guide to the royal family's most widely anticipated public event since the wedding of Lady Diana Spencer and Prince Charles.
Katie Nicholl is a journalist, broadcaster, and contributor to Vanity Fair and the Mail on Sunday. Katie works with the BBC and Sky News in the UK, CBC in Canada, and Channel 9 in Australia. She also works extensively in America where she appears regularly on primetime TV shows including Entertainment Tonight. Also the author of New York Times bestselling royal biographies William and Harry, The Making of a Royal Romance, and Kate: The Future Queen, Katie is a widely recognized authority on royal affairs.