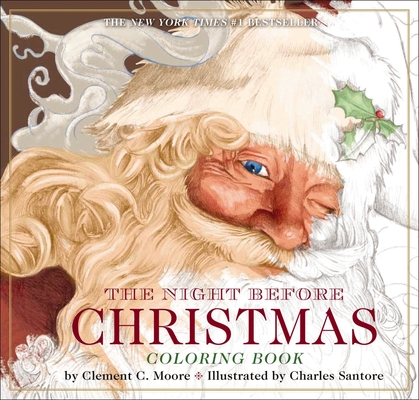 
Not On Our Shelves—Ships in 1-5 Days
The Night Before Christmas is an enchanting Christmas story that has brought Santa to life for generations, and here is the #1 New York Times bestselling edition of this classic poem, now availabe as a coloring book!

'Twas the night before Christmas, when all through the house
Not a creature was stirring, not even a mouse

These opening lines from the famous Christmas poem initially published anonymously as A Visit from Saint Nicholas, and credited as a work by Clement Clark Moore, have been inspiring kids and captivating their minds as they prepare for the coming Santa and his reindeer. Carry on a family tradition or start one of your own with this new version of the classic Christmas book for children and families. This coloring book edition includes:

Clement Clarke Moore, (1779-1863), was a professor at New York City's General Theological Seminary (built on land donated by his father) who, in an 1836 reprint of A Visit From St. Nicholas (more commonly known today as Twas the Night Before Christmas), was first credited as the author of the poem, and later included it in an anthology of his work.