That's Got 'Em!: The Life and Music of Wilbur C. Sweatman (American Made Music) (Hardcover) 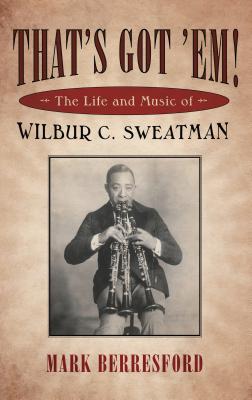 That's Got 'Em!: The Life and Music of Wilbur C. Sweatman (American Made Music) (Hardcover)


Not On Our Shelves—Ships in 1-5 Days
Wilbur C. Sweatman (1882-1961) is one of the most important, yet unheralded, African American musicians involved in the transition of ragtime into jazz in the early twentieth century. In That's Got 'Em , Mark Berresford tracks this energetic pioneer over a seven-decade career. His talent transformed every genre of black music before the advent of rock and roll--"pickaninny" bands, minstrelsy, circus sideshows, vaudeville (both black and white), night clubs, and cabarets. Sweatman was the first African American musician to be offered a long-term recording contract, and he dazzled listeners with jazz clarinet solos before the Original Dixieland Jazz Band's so-called "first jazz records." Sweatman toured the vaudeville circuit for over twenty years and presented African American music to white music lovers without resorting to the hitherto obligatory "plantation" costumes and blackface makeup. His bands were a fertile breeding ground of young jazz talent, featuring such future stars as Duke Ellington, Coleman Hawkins, and Jimmie Lunceford. Sweatman subsequently played pioneering roles in radio and recording production. His high profile and sterling reputation in both the black and white entertainment communities made him a natural choice for administering the estate of Scott Joplin and other notable black performers and composers. That's Got 'Em is the first full-length biography of this pivotal figure in black popular culture, providing a compelling account of his life and times. Mark Berresford is a writer, rare record dealer, and editor of VJM's Jazz & Blues Mart, the world's oldest jazz and blues record trade magazine. He is the author of Parry Thomas and Pendine and coauthor of Black Swan: The Record Label of the Harlem Renaissance.