Comics of Chris Ware: Drawing Is a Way of Thinking (Paperback) 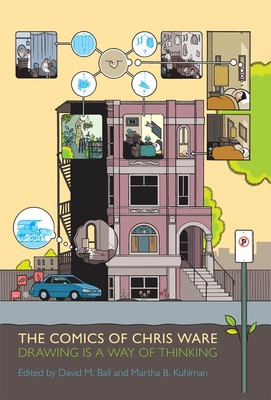 Comics of Chris Ware: Drawing Is a Way of Thinking (Paperback)

The Comics of Chris Ware: Drawing Is a Way of Thinking brings together contributions from established and emerging scholars about the comics of Chicago-based cartoonist Chris Ware (b. 1967). Both inside and outside academic circles, Ware's work is rapidly being distinguished as essential to the developing canon of the graphic novel. Winner of the 2001 Guardian First Book Prize for the genre-defining Jimmy Corrigan: The Smartest Kid on Earth, Ware has received numerous accolades from both the literary and comics establishment. This collection addresses the range of Ware's work from his earliest drawings in the 1990s in The ACME Novelty Library and his acclaimed Jimmy Corrigan, to his most recent works-in-progress, "Building Stories" and "Rusty Brown."

David M. Ball is editor of the Critical Approaches to Comics Artists Series, published by University Press of Mississippi. He is also author of False Starts: The Rhetoric of Failure and the Making of American Modernism, published by Northwestern University Press. His essays and reviews have appeared in The Cambridge History of the Graphic Novel, The Oxford Handbook of Comic Book Studies, The Journal of Modern Literature, Modern Fiction Studies, Artforum, The Los Angeles Review of Books, and elsewhere. He is currently working on a monograph about the intersections of comics and literary and artistic modernism. He teaches at Punahou School in Honolulu, Hawaii. Martha B. Kuhlman is associate professor of comparative literature at Bryant University. She has published in the Journal of Popular Culture, European Journal of Comic Art, and the International Journal of Comic Art