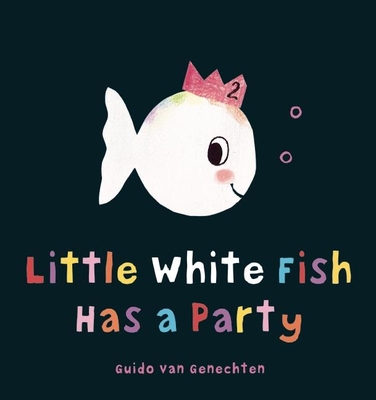 This is book number 2 in the Little White Fish series.

Little White Fish is getting bigger Today he is turning two. All sorts of sea creatures are coming to his party: round and skinny ones, long and short ones, and straight and curved ones too.

A playful book about opposites for children ages 24 months and up, with a focus on the child's language development

At Clavis, our focus is on what's best for children. We believe that books play an important role in each new phase in life. Our toddler books are tailored for every stage from 0 to 3 and focus on the five most important themes in their life: daily life, skills, emotions, the world, and language development. The age range and theme of every book in our toddler series can be found on the back cover in the form of a colored train.

Guido Van Genechten (1957, Belgium) studied drawing and painting, graphics and photography. Afterwards he worked for many years in the graphic industry. Now Guido works as a fulltime illustrator of children's books. In 1998 he won the international Illustrator's Award City of Hasselt with his picture book Ricky. This prize was the beginning of his international career as a children's book illustrator. Since that moment, Guido Van Genechten has created many best-selling stories and received several awards. In 2007 he was the winner of the Reader's Digest Award for Best Children's Book Illustrator. And in the past ten years his books were published in 30 countries around the world.